Trump, David Duke agree on the need for police to stop and frisk more black people

One more time with feeling:
Fuck. These. Assholes. 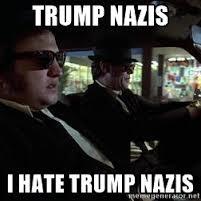 Well, if you just lock up all people of color then their neighborhoods would be completely crime-free.

And think of all that vacant real estate just waiting to be snapped up by wealthy developers and turned into luxury condos.

So it’s win-win. Well. . . maybe not for the “negroes”, but hey, do you want to fix the problem or do you want to prance around caring about people’s rights and shit. Gimme a break. We need solutions right now, whether they work or not.

What a revoltin’ development.

As someone who lived in Chicago in the 1980s, the Illinois Nazis were very real. Their leader, Frank Collin*, was like the Fred Phelps of his day. The Illinois Nazis tried several times to march through Skokie, which is heavily Jewish, just to stir up trouble. The residents just let them march, giving them the ultimate fuck you by ignoring them.

The horrible thing is, stopping and frisking more black people would actually be an IMPROVEMENT, considering that the current trend is stopping and shooting them.

Or in the case of Tamir Rice, not even stopping

I am convinced that by ignoring Trump and his family that their hold on peoples darkest thoughts, angers and insecurities will diminish. If only the press would would just fucking ignore these assholes. There is just too much ad revenue to be made. Greed is blinding.

BTW We should stop and frisk all these corporate assholes at executive terminals across the country.Federal agents should cavity search these fuckers every time they look cross eyed at their Lear jet stewardess.

Don’t forget the increase in free forced labour for paint and white goods manufacturing. It is win-win-win!

That might have worked if the media had done that from the very beginning of his candidacy. He should have been treated like ever other third-party joke candidate - ignored by the media except to be mocked, not given a platform. But they didn’t do that. He’s already emboldened the racists and mainstreamed the alt-right. Now he might very well be president, unless every ugly thing he says and does is covered.

Scary thing is, as we all know now, “every ugly thing he says and does…” does not matter to his supporters. That should seriously get folks to the polling booths and vote for Hillary no matter what you may think of her.

BoingBoing would do well to run articles encouraging folks to get to the polls instead of running repetitive Trump stories two and three times a day. We already know what a waste of flesh Trump is.

That might have worked if the media had done that from the very beginning of his candidacy.

Difficult to pull off considering he has somehow managed to stay in the media spotlight for the last 30 years. He had a public platform long before he formally announced his run for office.

does not matter to his supporters

At this point it’s not about his supporters - they had their minds made up a while ago, but they weren’t - and aren’t - sufficient to win him the election. It’s about the people on the margins of the poll numbers who say that they’ll vote for him despite not being a supporter of his, the ones who keep changing, that need to be reached. And it’s anything that allows those people to say, “Well, maybe he’s not racist” or “Maybe he’s not that bad” that makes it possible for them to contemplate voting for him.

As a supposedly successful businessman and rich person, sure. More recently as an entertainer, yeah. As a political candidate though, he was, until very recently, a total joke. This isn’t his first run for office, after all - he’s done this multiple times (starting in the '80s, even), had no success and quickly given up. The media attention given to him - at least in the early days - was largely because of a presumption that this time would be no different. But things have changed in American politics and the media landscape.

What frightens me (us) more than his possible presidency is how he has lowered the acceptable standards such that that any US person interested in entering politics can do so no matter what lies in their closet. And be taken seriously. Slandered someone? No problem. Stolen from a charity? No problem. Racist? No problem. Nazi? No problem. Insulted a US Serviceman? No problem. Swindled people? No problem…on and on…

This new acceptance is fucking scary shit. Not the America anybody should want.

Ironic that these same people only seem to get freaked out about coed bathrooms.

I think there are some convincing arguments that tRump represents the end of democracy in this country. On the one hand, tRump gets away with things that no other candidate could, because of his particular combination of history and attributes, but on the other, tRump seems to merely mark the culmination of something that’s been happening, unobserved by the mainstream, in the margins of culture, with the balkanization of modern media and the growth of the alt-right, etc. So it may have been something that would have happened, at some point, even without him.

How could anyone who likes to think of themselves as a non-racist person not be disturbed when the KKK yells “ditto!” in response to everything their favored candidate says?

Hint: It does not involve setting policy for local police departments.

Hint: It does not involve setting policy for local police departments.

But it certainly can involve the executive branch informing local police departments that the 4th amendment won’t be enforced.