That pic should be on the Wiki page for Dunning-Kruger.

Not paying your taxes definitely makes you unpatriotic in my opinion. Shows a distinct contempt for the country you rely on for infrastructure and security and basic services.

While there is a lot crazy and BS going on in your post, one thing that stood out: Single, spread out shots? That makes negative sense. If its a single shot, then it can’t be spread.

Also: Tiny children are not horses?

Edit:wrote shit instead of shot. As crude as it maybe a single unit of the former can be spread.

I’m pretty sure he is referring to the giving of multiple shots of different vaccines at one time.
Here is the CDC suggested immunization chart for the US:
http://www.cdc.gov/vaccines/schedules/hcp/imz/child-adolescent.html

That would imply Donny has any idea about vaccinations. Not likely.

Just when I think I can’t loathe the man more.

If you do, you can die knowing that you came up with a great band name.
Their first single could be “My Racist Uncle the Trump Voter”.

“Not vaccinating your children is as dangerously stupid as voting for Donald.”

You are Erin on the side of the obscure

I had to go and check that “realDonaldTrump” isn’t a satire. I’m still not sure.

Oh come on, it’s not that dangerously stupid. At worst it would merely expose humanity to ravaging deadly plagues.

I have to say the analogy holds up pretty well.

If one person refuses to get (their kids) vaccinated it’s still stupid but it probably won’t do any real harm, it’s only when larger amounts of people make that stupid choice when it actually becomes a problem.

Please don’t. Despite being as bad for people as Trump undoubtedly is, we need all the sane people to stay healthy.

Every time I see this sign, I think of an admonishment to Joanie not to move in with Chachi.

So - not a spelling mistake at all, but an anti-science placard in support of Trump.

No shade here, I was still trying to formulate a joke about why this spelling-challenged guy was so mad at Rick Moranis…

An emphatic call for the Ghostbusters’ star to increase his fibre intake? 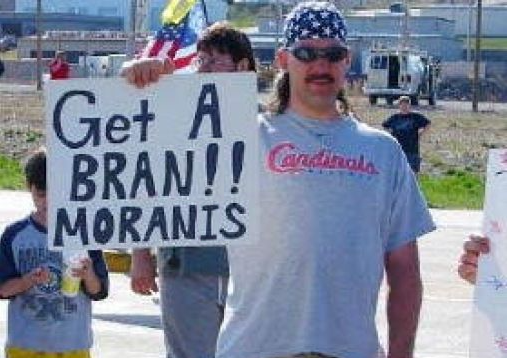 I actually do have an uncle that’s a Trump voter (although not a racist) and an aunt (yes a racist). Uncle Tom is a Vietnam vet with chronic illnesses and PTSD and yet he still thinks Trump is the candidate who will take care of veterans. I give him a pass because he’s old and sick and confused and doesn’t understand the internet. He tried to sign up with the Log Cabin Republicans online. He’s not gay.

The aunt I just unfriended because she’s an asshole.

I have a FB friend who keeps posting how out of touch with blue collar America Hillary is. Someone pointed out Trump is worse, and he replied with something totally unrelated.

Anyone who can’t see just how fucking dangerous Trump is deserves him as president.

Anyone who can’t see just how fucking dangerous Trump is deserves him as president.

Yea, but we’ll all have to live with that dumpster fire…

Yea, but we’ll all have to live with that dumpster fire…

I know. I’m beginning to think that he’s trying to lose the election now, but without (in his mind) damaging his brand.

My father-in-law, while not actually voting for Trump, thinks Hillary is just the worst (he’s going 3rd party because “I live in Utah and it won’t matter”). But every time he says something he dislikes that Clinton has done, we point out that Trump has done the same thing but worse. “She charges too much for speaking fees!” Well, Trump charges more. “She lies about things!” Trump lies more.

I love my FIL but I had some choice words for him about being a straight white male and having the luxury of a “protest vote.”

My wife used to tell me about the nurses in the Pedi clinic using three syringes at a time for whatever schedule of shots.

They would take all three syringes in a fist and then inject all in one motion so there was only one OUCH moment and not three.