With Ivanka, Don Jr., and Peter Thiel at his side

Glad to see he’s doing a great job of continuing to avoid conflict of interest.

Bill Gates says Trump has the opportunity to be like JFK

Of course his children needed to be there.

They needed to get their scents so they’d be ready for the Great Hunt.

I don’t know why anyone bothers to meet with him - even if you manage to get him to say something concrete or vaguely substantial, he’ll just forget it a day later and/or do something completely different in terms of actual policy. So what’s the point? Simply to not piss him off so he doesn’t try to destroy your company?

Glad to see he’s doing a great job of continuing to avoid conflict of interest.

It’s like he saw all the articles about his conflicts of interest and said, “Fuck it, I’m not even going to pretend.”

Is holding a meeting like this a normal part of any Presidential transition? It doesn’t sound familiar but maybe it just wasn’t noteworthy when it wasn’t taking place in a skyscraper named after the President Elect.

Or perhaps we’ve just have never had a President arrogant enough to think the leaders of some of the most successful companies in the world could benefit from his wisdom.

Twitter couldn’t be present because that would represent a conflict of interest.

Also, Tesla and not GM or Ford? I think that both of the old guard will be far more significant than Tesla for the US economy for many years to come. Possibly for as long as cars last. The amount of technology it takes to make a modern car greatly exceeds the amount in the most complex execmobile, and it’s there - CAD, CAM, robotics - that the big old guys have a commanding presence.

Tesla is not an automotive company. Tesla is an energy company. They make electric cars, among other things. Things like solar tiles for roofs and battery packs (residential and utility-sized). Expect the other things to become more important in the future.

Nice photo op. Wait til those same CEOs find out he deported all their engineers.

I’m sure he wouldn’t mind, as long as @twitler isn’t taken.

Tesla is not an automotive company. Tesla is an energy company.

The US is known to have very big electrical infrastructure problems - wrong kind of generation in the wrong places, too fragile. It’s something that really needs a state-level actor to plan the necessary investment and bang heads together, but it’s too abstract for the electoral process. I still don’t understand how Tesla’s approach is supposed to scale under present constraints unless, at some point, they start to invest in oil or gas powered generation capacity to get their charger network to an actual tipping point. If you’re right, then the other big energy players should be there as well.

If as I suspect this whole thing is a publicity stunt, well, inviting Musk makes sense.

The irony of Trump considering twitter pro-Hillary made me laugh.

Then I realized he is a president literally cutting down anyone he views as a dissident, and realized that this is him doing it without any actual power yet.

At least Honeycomb is big. Yeah yeah yeahyeah yeah!
It’s not small. No no nono no!

Musk’s way (or goal) of doing things is not so much to compete in an established market but to disrupt it with “first principles” engineering ideas by creating a much better product than the competition at an attractive price.

In Tesla’s case he wants it to be “lowering costs and minimizing dependence on fossil fuels and the utility grid”. They are manufacturing solar roofs, battery packs for home owners and (probably district-level) utilities so they can affordably creating and store their own power. This means he is basically letting people work around the infrastructure problems and the intractable political and economic corruption that created those problems. It scales by being decentralized.

Tim Cook has that “What fresh hell is this?” look on his face in pretty much every picture. I don’t know if it’s because he’s having to listen to Trump bloviate about ‘innovation’, or that because as an openly-gay man he’s a little less than thrilled at having to sit down at the same table as the openly-bigoted Mike Pence, but, Lord knows, he doesn’t lack for reasons.

The “no formal chain of command” line would sound refreshingly direct if it didn’t come from Trump. I may be being too cynical, but coming from Trump, I assume it’s coded shorthand for “I’m going to be making demands on you that I don’t want on the record.”

Tim Cook has that “What fresh hell is this?” look on his face in pretty much every picture.

I could have built that floating island with the death lasers https://t.co/rmaIQji1PO 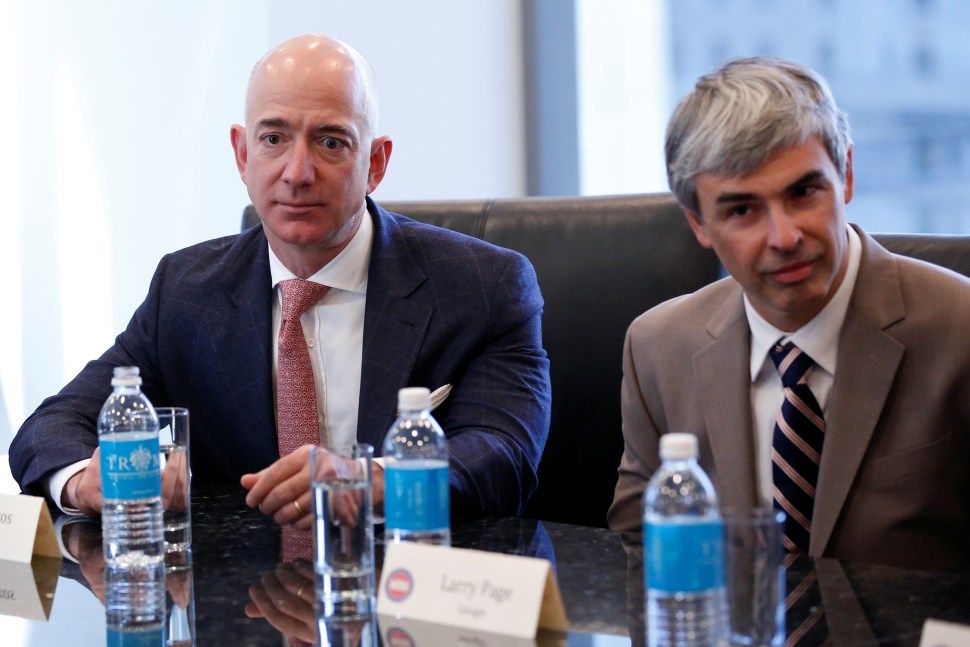