Trump protected from attack by Satan

I was actually expecting an article where trump was attacked and Satan came out like the secret service to defend him. Kind of disappointed.

Ditto. My first response when I saw the headline was, “That’s some ambiguous grammar.”

yeah, i actually thought satan was protecting trump, which made a lot of sense at first blush.

"Wait a minute, how did Satan protect Trump from an attack?

Well, there goes plan A. Anyone have a phone number for Shiva?

Crap! All those goats dead for nothing.

Wait a minute, how did Satan protect Trump from an attack?

The more important question is why, and the answer there is as a favor to his buddy Mammon, whose earthly avatar attempts to cover up the telltale signs of its true nature with orange paint and some weird stringy symbiote. The gloves to compensate for the hand size must have gotten lost somewhere in Limbo.

Everyone knows Trump is on TeamSatan…I mean he has a direct line to Hitler.

Ah, but can they protect his fragile male ego?

I think this was all prophesized in the Letters From the Earth!

The giveaway here is that the Satanic Temple are decent people who are very community service minded, and who work tirelessly to protect the separation of church and state.

So the guys with satan are kind of the opposite of the religious dominionists who love trump so much.

Because Satan doesn’t want elderly white men to… what?

Well, why would Satan go after his right hand man?

I never understood why they refer to themselves as Satanists. Isn’t their whole ethos based on reconciling one’s mortal self in an indifferent universe? And acknowledging that we too are animals with the same basic desires as supposedly lesser beings and that we don’t need to guilt ourselves about those desires? And that we should love one another? So, like Buddhism, but with more Slayer roadies?

None of this seems to invoke a mythological being of any sort, let alone one invented during the primordial era of the Abrahamic faiths.

ETA: Ah, here we go. From Wikipedia (of course):

“The Church of Satan has chosen Satan as its primary symbol because in Hebrew it means adversary, opposer, one to accuse or question. We see ourselves as being these Satans; the adversaries, opposers and accusers of all spiritual belief systems that would try to hamper enjoyment of our life as a human being.” —Peter H. Gilmore

This only describes atheistic (LaVeyan) Satanism. Theistic Satanism (where they actually believe in and worship Satan as a deity) is a whole other community.* FSM only knows what they practice.

*ETAA: Assuming Rule #34 can be extended to religious beliefs which, given human history, is totally plausible.

The giveaway here is that the Satanic Temple are decent people who are very community service minded, and who work tirelessly to protect the separation of church and state.

So the guys with satan are kind of the opposite of the religious dominionists who love trump so much.

I believe the relevant Christian quote is that “If Satan ever deposed God, he’d have to take over God’s job.”

I think that that happened at some point in the US already: 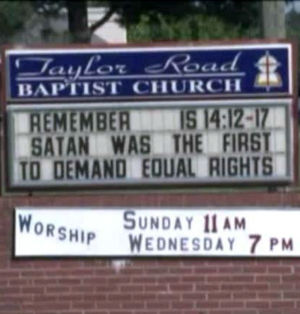