Trump Rally shut down thanks to protestors

An entire section were protestors and when the whole thing became chaotic, he didn’t show:

Donald Trump’s rally in Chicago was canceled amid safety concerns this evening after an entire section of attendees turned out to be protestors, sending the arena and surrounding area into chaos.

Does this mean Drumpf was trumped?

Am I the only one bugged by the communist flag and how that could be played as?

Jesus, gawker’s site is shit. Why should I have to allow SIX other sites run scripts to see an article with an embedded video?

“Trump rally shut down due to Trump’s fear of looking weak”.

They’re heroes. They turned the narrative in every national paper into Drumpf rally as criminal disturbance and/or ungovernable chaos. Whatever the activists are drinking in Chicago should be bottled and drone-delivered to every community in the country.

It doesn’t bother me. We need to build coalitions across the political and social landscape.

To be clear, the violence seemed to have started after the rally was called off and was in part due to his supporters. They are not innocent in this. They have long been attacking peaceful protesters at his rallies and Trump has been inciting them by saying things like “they are not real Americans”.

Things are tense. I’m predicting a long hot summer like 1968, again. The GOP convention is going to be a shitshow.

Violence was the result of the event being cancelled. That’s when protesters and the rally atendees clashed, or at least how I’ve seen it reported.

Given Trump’s support of attacking protesters there’s no proof that the protesters started the violence, and as such did not “use violence to suppress free speech.”

What bothers me most of all is my family and everyone like them sharing the joke ‘If they’d labeled it as a Job Fair none of those useless motherfuckers would have shown up.’

We need to change the narrative. Maybe they’re so far up Trump’s ass they can’t be reached, but that kind of rhetoric means doors are slammed and they don’t want to hear. This is the same rhetoric that I heard during Occupy. It’s the same I hear about welfare.

How do we change that story so maybe those that aren’t ultra hardliners will see that they’re looking at the problem wrong and pointing the finger the wrong way? 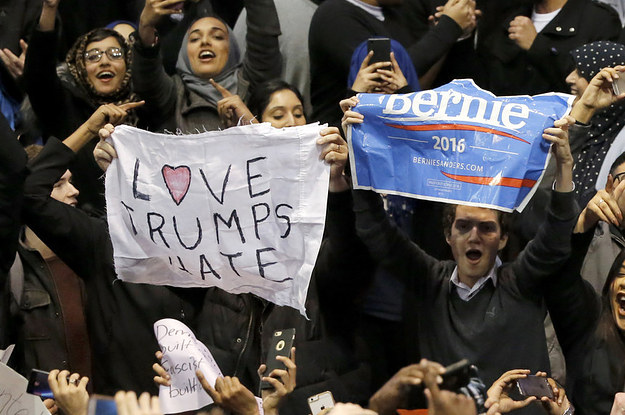 The billionaire said Bernie Sanders was lying when he said his supporters are not told to go to Trump's events.

Everything Denton touches breaks. Io9 (well, what’s left of it) doesn’t even work in Firefox on my nexus, and half of jalopnik’s articles don’t work either. As for fucking Kinja, its only saving grace is it’s so awful, it must have discouraged at least some dickheads from commenting any more.

Do you guys want to fork this discussion on the gawker platform? Thanks.

Except it’s not like protesters weren’t showing up to the other GOP hopeful’s rallies, or to the Dems for that matter. But it’s Trump’s rallies that turn into fracases. The suggests it’s Trump and/or his supporters, not the protesters, who incite the violence. Up until now the protesters have mostly allowed themselves to be bullied, beat-up and arrested just for being there. Chi-town apparently isn’t wiling to be Trump’s doormat. If anyone is using violence to silence people, it’s Trump’s supporters and security silencing protesters. And if this is what silencing a political candidate’s voice is like, why is it that I literally can’t turn on a news outlet without hearing about what he just said?

I know you mean well, but I humbly submit might be laying the blame at the wrong feet.

I worry that this is having the opposite effect.

According to NPR, dozens of people talked to their reporter outside Ohio rallies today, all saying the same thing: they were fired up to attend because of the trouble in Chicago. Plenty of people said they showed up specifically to show support after the Chicago rally was shut down. I think that silencing Trump is making his support stronger, bizarrely enough.