On the bright side, the alleged attacker has deep pockets and won’t come off very sympathetic to the average jury in the blue bubble of Asheville. He’ll get community service to go with his felony conviction, losing his voting rights in the process, and she’ll get a large cash settlement.

Well, that’s nice, since it is, you know, a crime.

I thought that was an odd sentence too

A outright blatant crime in front of many witnesses, the only unusual thing would be if the perpetrator wasn’t charged for it…

She fell on her oxygen tank?

And we used to think hitting someone with glasses was bad. That’s before we even consider her age. What a vile human being the perpetrator is.

Agreed, but I don’t think the thuggery of these Know-Nothings is going to end in November. In fact, after the Apricot Il Duce claims that his (likely) loss is due to conspiracies of minorities, the media, a rigged general election, etc. we might see an uptick in political violence by right-wing populists.

the blue bubble of Asheville

Blue bubble is right. I thought I heard Trump would be in Asheville on the local NPR station earlier this week, then figured I had misheard. You could almost believe that swaying voters isn’t even his goal any longer. Rather he’s simply looking to cause violence.

Much as in the UK, racist and anti-disabled hate crimes are on the rise, enabled by such high profile nastiness… Even if they don’t win the elections, damage is still being done…

Trump himself is not legally liable. He’s not even morally culpable.

She fell on her oxygen tank?

And we used to think hitting someone with glasses was bad

Yes, but what is she hiding about her health? And do we know that she’s followed correct email procedures? We should be investigating the REAL criminal here!

I’d ask if Trump intended to pay the attacker’s legal fees, but I suppose the lady wasn’t getting ready to throw a tomato, so he’s off the hook.

Trump himself is not legally liable. He’s not even morally culpable.

When you tell your supporters to “go ahead and rough up the protesters, I’ll pay your legal bills” (or words to that effect) then you do share moral culpability for their actions.

From a Google search stalk, looks like the puncher is 73. No less of a scumbag who’s going to get what’s coming to him, but it charges the narrative a little too.

A outright blatant crime in front of many witnesses, the only unusual thing would be if the perpetrator wasn’t charged for it…

Not so surprising. He’s white, after all.

Well, that’s nice, since it is, you know, a crime.

It’s worth highlighting that he’ll be charged. Lots of assaults have happened at Trump rallies, and the police don’t seem to be particularly interested in doing anything about it.

That’s like killing three birds with one punch. That guy is a hero. It’s about time an aggrieved white male finally fought back against the elderly disabled woman oppressors 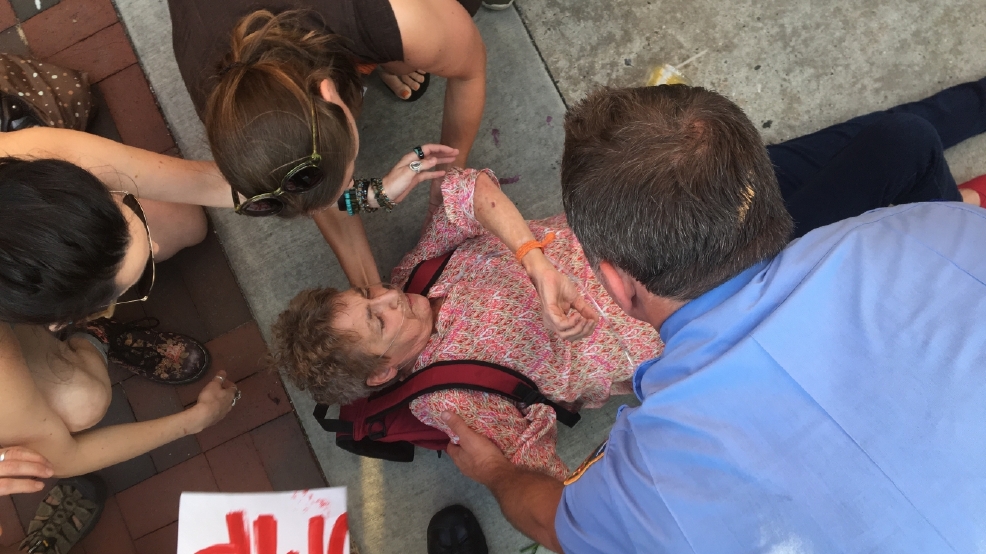 UPDATE: With regard to the following story, Buncombe County court documents show the charge was dismissed April 21, 2017, through prosecutorial discretion, after consultation with the victim and review of the case. A lawyer for Richard Campbell tells...

Police said they didn’t make an arrest because officers didn’t witness the punch.

an attack so deplorable

Whoa, whoa, whoa, slow down with the hate speech! /s

Oh I agree. But watch how fast he washes his hands.