Easy for him to say, turning out the lights and hiding under his desk and all.

One person listening in on the call describes the president’s words and tone as “unhinged.”

So, typical Monday at the White House, eh?

How do they expect to get re-elected if they don’t tell the cops to shoot peaceful protestors and begin arresting the public en masse?

His new nickname is going to get so much mileage.

Everything Trump says and does is wrong. Whatever he says, do the opposite, and you’re certain to be more than 50% on your way to doing the correct thing.

He’s a lodestone of awfulness.

He’s the guy that recommends everyone split up in a monster movie. But he’s also the guy that somehow manages to die last – or worse, live – mainly because the ghosts and monsters are busy chomping on the people who listened to his fantastic opinions.

Take back the streets : the streets aren’t going anywhere; be there to protect and help people, don’t escalate the violence.

Use force to confront protesters : don’t do this; only use force as a response to force, don’t escalate. Maybe listen to the protesters. The fact they have assembled en masse is a strong indicator that there’s a big problem, and fucking them up isn’t going to fix it.

It should be obvious to anyone by now that Trump wants – even NEEDS – to be a dictator at this point in time. His clock is running out, and once his ass is out of that chair he will hopefully be in the shit. But to be a dictator, he needs enough people to roll over and show him their bellies. Hopefully the governors are smarter than that.

I know a lot of people compare him to Hitler. I find him to be Hitler-adjacent. Like a generic knock-off of the real thing. It’s not that he wouldn’t do what Hitler did, he just hasn’t figured out how to do it yet. So he works in the long shadows of the more accomplished dictators that he openly admires.

That said, I wouldn’t have minded if the parallel continued and he never came out of that bunker.

Well, of course his GOP has his back - 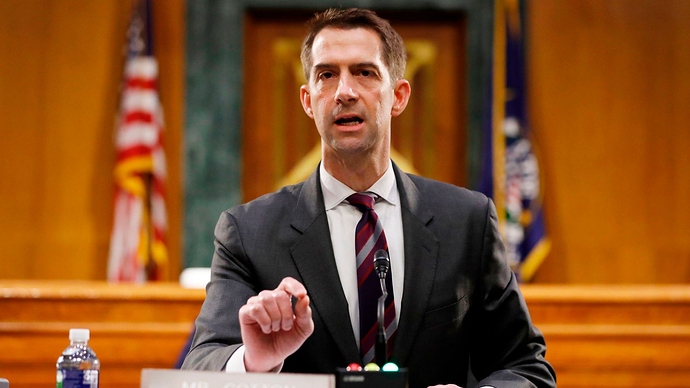 "No quarter for insurrectionists, anarchists, rioters, and looters,” the Arkansas Republican senator tweeted. 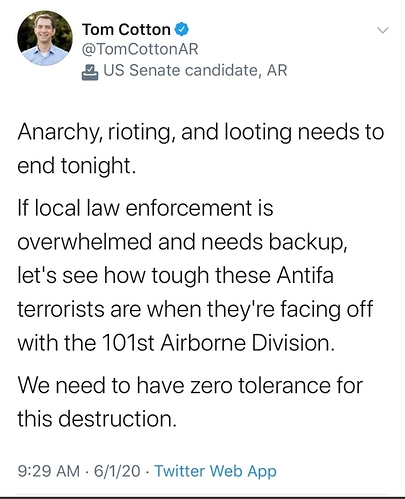 Please let someone leak the audio to Sarah Cooper.

Truly spoken like someone who does not understand how their own actions have consequences yet expects that everyone else’s should.

Of course the government and cops think cracking down on protesters mercilessly is going to end the outcry about police brutality. They literally can’t help themselves. Violence is the only language they speak (other than greed, anyway).

I haven’t heard of this and there does seem to be some credibility regarding the settlements, but I can’t find anything suggesting it was trump, himself. Citations?

(I know antifa is just a random word like libtard now to them, but it does still have meaning)

So, now he is unhinged?

Where the hell have some folks been.