Just posted this elsewhere, but it bears repeating – here’s the official statement from the Trump campaign last night, which reads like alternate-history fan fiction of Donald Trump, and is completely insane. 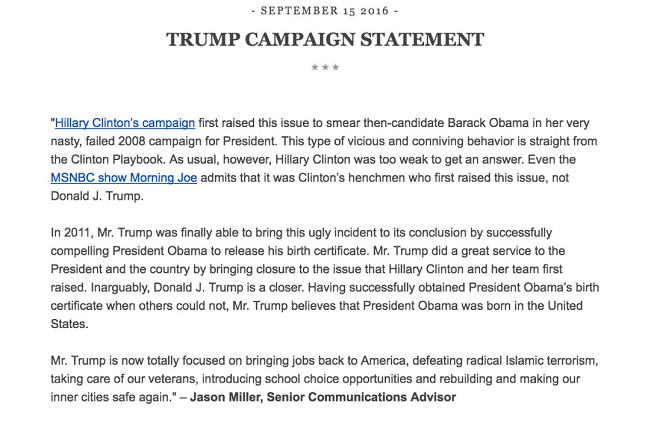 The Media are Trumps pawns. He owns them. He plays them masterfully. The media will only amplify him. The alt right revolution will be televised. For ratings and ad revenue.

Hillary, sadly, lost the media a long time ago. There is no ad revenue in boring.

Trump will go on TV and renounce his birtherism BS and wink at the same time. Media will have an orgasm.

I suspect Trump will denounce his birtherism the same way he admits he’s wrong–that is to say, without acknowledging anything he’s previously said.

He can’t afford to alienate racists. They’re all he’s got.

Dear Lord. This is like Joseph McCarthy taking credit for America moving past the communist witch-hunts of the 1950s.

This line wins the internet for today

The Media are Trumps pawns.

I don’t understand why so few of the big media outlets (and smaller ones like Boing Boing) don’t seem to understand this.

Slate collects all of Trump’s birther quotes in once place, for whatever they’re worth.

They are worth worth a lot… to Trump. I’m imagining some millennial at Slate using their Twitter skillz to collect these tweets thinking they have a great gotcha piece. They don’t. All they are doing is helping Trump win the presidency.

It almost makes me wonder if Trump has a friend on Slate’s board that owes him a big favor or something. @beschizza posts so often about Trump, I’m pretty sure he’s part of the Trump machine.

I don’t understand why so few of the big media outlets (and smaller ones like Boing Boing) don’t seem to understand this.

Once you realize that journalism is dead enlightenment is right around the corner.

The Media are Trumps pawns. He owns them.

Well, this is what you get when Trump gets the head of Breitbart to run things for him. His campaign is doing a brilliant job of just failing to mention his history of racist ranting and is expertly rewriting his history to make him a charming, funny, charismatic fellow. It’s terrifying to watch.

Trump getting his hair played with last night by Jimmy Fallon is an image that will win the campaign, weirdly enough.

True; just because one “understands” something doesn’t mean that one has to like it… or keep quiet about it.

Hillary’s campaign should counter by revealing that Hillary and Bill have been having a polymorphous relationship with Antonio Banderas for the past 5 years. .

(sorry 'bout that one! Getting hungry for lunch. Fading…)

“Mr Trump did a great service to the President and the country by bringing closure to the issue that Hillary Clinton and her team first raised.” 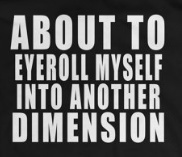 WHAT IN THE FUCK IS HAPPENING? HOW CAN ANYONE BELIEVE THIS?

God damn it. I don’t understand anything anymore.

Trump getting his hair played with last night by Jimmy Fallon

Did that really happen?
Is the world that far gone?

Apologize to your sister!

“I’m sorry you got upset by what I said”

Meh…the big new isn’t Trump admitting that Obama was born in HI, the BIG news is the opening of a fabulous, amazing new Trump Hotel!

I wonder how much the Trump Campaign had to pay the Trump Hotel for using the Trump Ballroom so that Himself could stage a publicity stunt attended by national press to promote the Trump Hotel?

@beschizza posts so often about Trump, I’m pretty sure he’s part of the Trump machine.

Talking about Trump is a problem in its own right, sure.

But it’s not the same problem as heading off to the races with false balance, equivocation and applying the AP style guide to Nazi memes.

From me you’ll get “Trump is a suppuration of rotten apricot flesh coating America’s nostrils in a blanket of sense-dulling slime”, whereas from them you’ll get “Trump, Clinton tussle over olfactory reception issues.”

Did that really happen?

Yep. On last night’s show, Jimmy Fallon:
• Mussed Trump’s hair and giggled along with Donald
• Showed pictures of a young, handsome Trump to “awwwws” from the crowd
• Nodded and smiled as Trump bragged about his appearance on Dr. Oz
• Referred to Trump and Putin’s relationship as a “bromance”
• Said that Trump’s campaign has been “exciting and amazing to follow”.

Fallon is a shill. Just another face of ad generating machine.