Not even his source has a copy of these documents? I suppose he is just waiting for the replacement to arrive via USPS media mail. Unless his source ran out of mimeograph fluid.

If only the US mail system wasn’t in the process of ‘re-organisation’.

If only we’d invented some kind of portable camera that was attached to a communications device. Then you’d be able to send pictures of these damning documents without ever needing to ship the physical copies!

Sadly, we shall just have to accept Tucker’s third hand reporting.

Wait - I’ve just realised! How did Tucker know that they were damning unless he received some kind of copy? Maybe a fax? Could we not see those copies?

Or is he really just repeating something that’s just hearsay - that someone claimed to be reading from whilst on the phone, for example?

Hmmm. This has unexpectedly become rather… shady.

I love how someone in NY is supposed to be sending these documents and in the exposition, they’re documents “WE” sent. I might give the story some credence if some mail carrier corroborates, but I won’t hold my breath. Naw, i won’t give it credence even then.

Pretty much, according to Fox “News”'s own court filings. A quote from the judge in the case included in the NPR article:

She wrote: “Fox persuasively argues, that given Mr. Carlson’s reputation, any reasonable viewer ‘arrive[s] with an appropriate amount of skepticism’ about the statement he makes.”

On the eve of the election, in the midst of conservative attempts to drum up a story about Hunter Biden’s shady business practices and how it relates to Joe Biden, Tucker Carlson gets a trusted source with credible, damning documents proving all the allegations that have been hinted out, but gee… they were lost in between stops while being shipped by a “major carrier, one that everyone knows the name of,” but whose name he can’t share with his viewers for some odd reason.

They didn’t hand deliver these incredible, damning documents? They don’t have copies of these amazing, new revelations? He can’t even talk about what was in them that made them so important to his story? And THIS is the October surprise that we were all so worried about, a level of lying incompetence that is breathtaking in its scope?

But I’m sure the REAL story is this was done by the nefarious “deep state” with tens of thousands of employees who, while being incompetent government bureaucrats who are complete inept at their jobs, are also amazingly the most secretive organization in the history of the world and able to execute perfect mail heists from moving delivery trucks in the middle of the night without leaving a trace of their existence.

And to think I was worried about the GOP smear engine running in high gear this year.

Update: okay, so apparently UPS has weighed in and admitted they were the shipper. But they’ve been unable to find the contents of the package. Which in no way changes how I feel about this story. Frankly, I suspect they shipped an empty box with the flap open or very lightly taped, expecting this would happen so they could then jump down the “deep state covert operatives” hole while castigating the “media covering for Joe Biden.”

This is part of the fun ubiquity of the Deep State conspiracy. Any piece of data that’s missing can be assumed to have been disappeared by Them. Any piece of data that’s present is manufactured by Them. Anyone who testifies against Trump is doing so as They have gotten to them. Or they’ve been secretly a part of the Deep State all along. That’s proof of how deep it goes. Eventually it’ll just be a reality show, with Trump and his family, and the twelve people who still believe in the Deep State, and they’ll tell them crazier and crazier bullshit, and every week one of them will wise up, say “Hey, this has been malarkey the whole time!” and they have to leave the Island. The winner gets to/has to marry Trump or one of his kids. 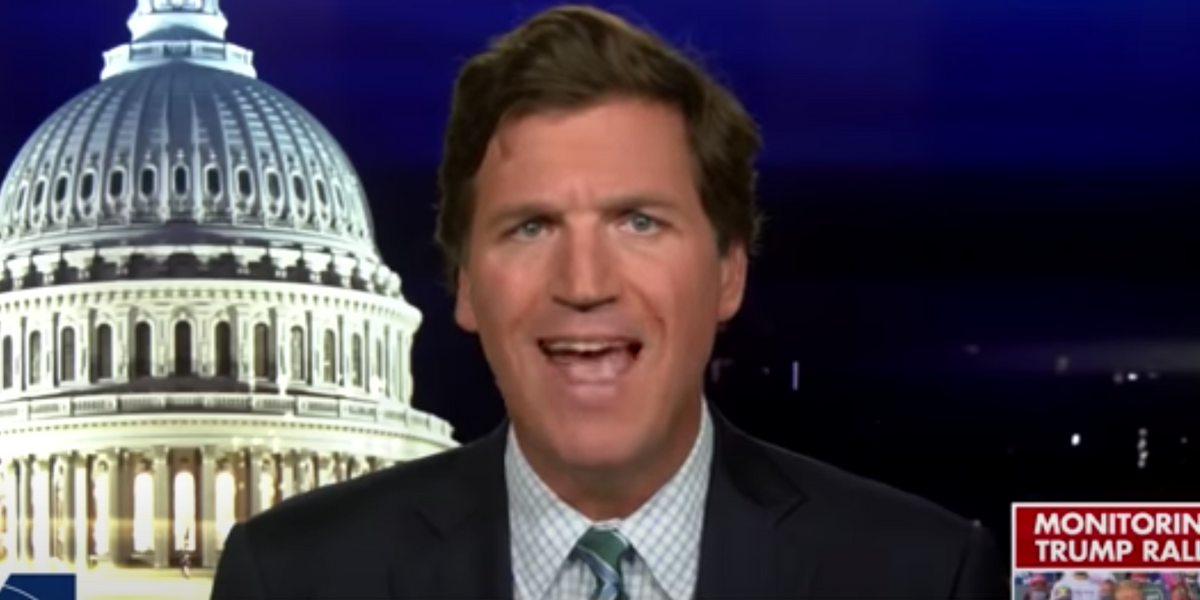 Also no 'reasonable person' would watch him in the first place.

Remember, this deep state cabal is so effective that it’s monitoring Tucker Carlson’s text messages and can infiltrate secure UPS facilities, leaving no trace, BUT didn’t do anything to stop a drunk Hunter Biden from flying across the country with a laptop containing all the incriminating evidence and dropping it off at a blind computer repairman’s shop in the rain.

The point is, it’s tough to find good help these days.

Not even his source has a copy of these documents?

No, but apparently they took a picture of the envelope (?!?) they sent.

Fox News said that Tucker Carlson Tonight averaged 5.36 million viewers in October. The network said that show’s monthly average viewership was the highest for any program in cable news histo…

At 1:36 in the video he says “[the shipping company] used pictures of what we had sent to look for it…” so either Tucker is lying about the documents the producer mailed being the only copies (and how deeply stupid would it be to send unduplicated originals?) or Tucker is making the whole story up.

Maybe they’ll arrive by Nov 3rd at 8pm so Kavanaugh can count them.

No kidding! This guy is nothing but a joke and the more his clown bullshit gets exposed, the better.