Attempt is the key word here.

Oh sure… I’m not saying he should be arrested or anything like that… just… maybe come up with a better protest?

I approve of his message.

Let’s buy him a drink!

I think that building will require a more robust demolition solution.

If this happened in America, would Fox call this guy a hero for attempting to firebomb the US Capitol?

Depends on how right-wing he is, and which party is in power at the time.

I lean towards not hurting civilians too, but coffee first. A- for effort on his part, hope his stay in the goulash is not too long.

Another bit of evidence that pooty poot has everything under control.

But of course, I think Putin has a taste-tester.

I wonder if there will be some consideration of limiting the availability of alcohol in Russia.

On the plus side, I imagine the act is intended to just be symbolic because it’s a brick wall and it’s unlikely to have any real effect, besides some scorching…

It is too early to discuss booze control!

I think that building will require a more robust demolition solution.

This looks like a job for Guy Fawkes Man.

No, there will not

I wonder if there will be some consideration of limiting the availability of alcohol in Russia.

Even if it comes to that, many Russians will likely make their own. I’ve had a few glasses of homemade hooch in former Soviet countries.

Fun Trivia: In Moldova’s wine country, near Chisinau, one of the underground wineries has a “secret” room where they claim some folks in Gorbachev’s government hid bottles of the best wine and liquor during his institution of a “dry state” prohibition. I don’t know if it’s true or not, though.

This song got stuck in my head, and after a quick consultation w/ the Oracle at Google, I now know that this song is about a crimson Lada amongst other things. ^____^

-cough- (dusting off an ancient meme). 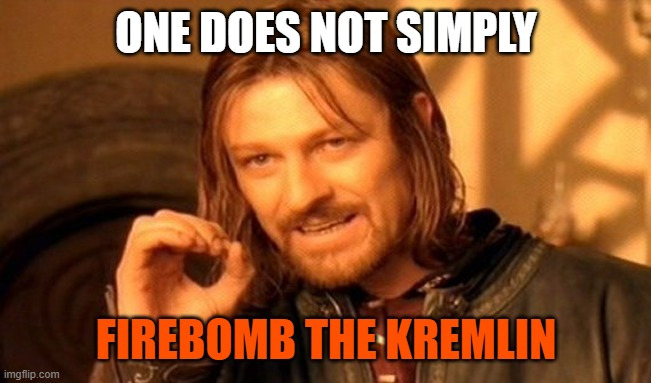