“If you hear, in 131 days from now at some point in the night or early morning, ‘We can now project Donald J. Trump has been re-elected the 45th president of the United States’ — let’s talk,” Hannity said.

“What’s at stake in this election as you compare and contrast, and what are your top priority items for a second term?,” asked Hannity.

He responds with word salad because the question was too long and complex.

131 days? Night or early morning? Compare and contrast? What is this, the SAT’s?

“What will you do in a second term?” is about the right length and complexity for him to answer.

ETA: for him to answer on topic. Coherence not guaranteed.

Translation of Hannity: I’m so excited to be talking right now to the actual fucking president and I really want to show that I can ask intelligent questions!

Or a magic 8 ball; shake it up and see what swims up to the surface.

I’m glad that he too has no clear plan to be in the white house next year.

“well, Sean, it’s really important to me to not be arrested”

Lasted about 15 seconds of Hannity speaking then had to stop it.

Hannity may be a dull spoon, but those responses are pure pudding.

Don’t sell him short, he’s got tons of experience running things into the ground.

i forget which one of the authors here mentioned it first, but hannity. poor guy. poor munchkin. he’s orange.

i can only assume he’s tracked down the literal exact same two dollar bronzer that bunkerboy uses and hired one of the same make-up artists ( i use that term liberally ) to spackle it all over his face area.

the self loathing that must entail. i can’t even. ( though, i guess, for what it’s worth, it’s good to know that hannity feels the same about hannity that everyone else does. )

he nailed Bolton exactly. A guy who joined the national guard to avoid fighting in Vietnam despite supporting the war! He is a bloodthirsty warmonger who doesn’t feel even the slightest twinge of guilt when he bombs people in foreign countries or sends American youth to die for fake weapons of mass destruction. 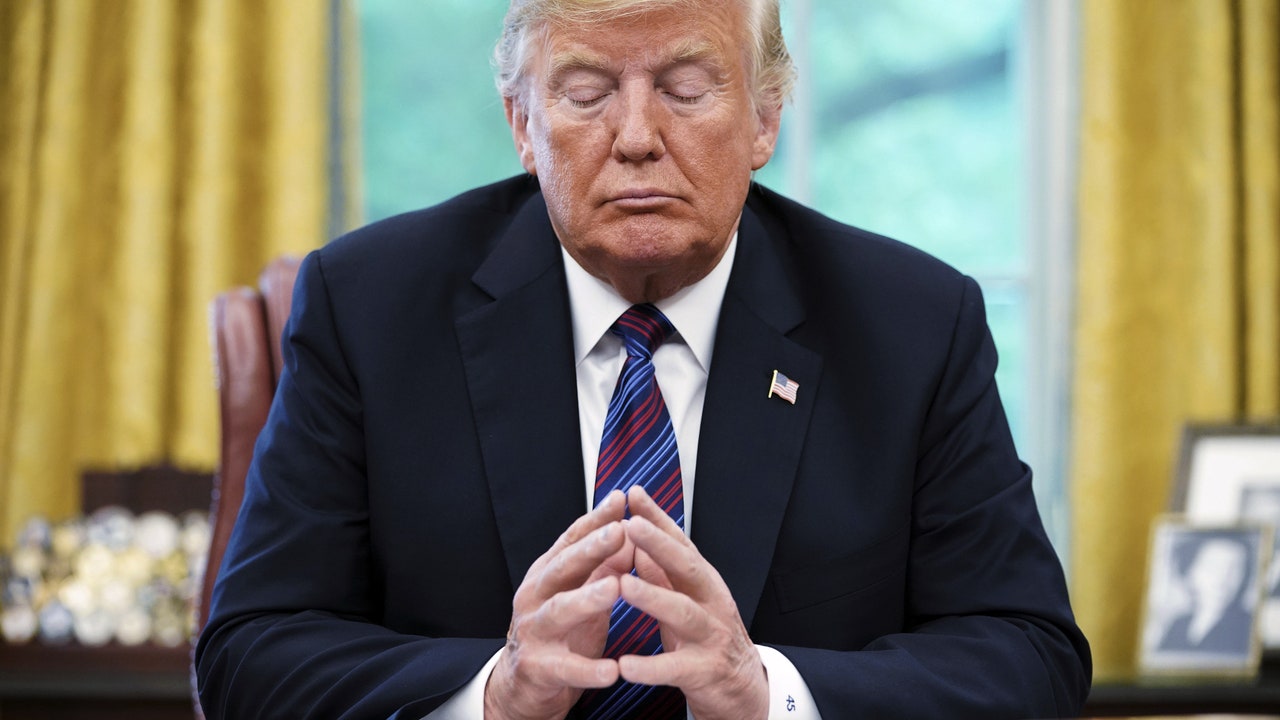 I really feel like people are underestimating this motivation. The Times laid out what was, to me, a pretty convincing case that he, his companies, and his garbage adult children have committed and benefited from massive fraud. Plus he’s an unindicted co-conspirator in Cohen’s federal crime. All it’s going to take is an enterprising federal prosecutor with an axe to grind, who doesn’t like what Trump and Barr have done to the Justice Department.

trump has nothing on pence, are you seeing this right now from the “mission accomplished” task force?

Perhaps if all the pressure piles on he’ll sink into a gigantic man-baby depression and give up for months. His tweets will be pure pity-party. The rallies? Glum and lifeless, scarcely attended. He’ll start talking about how much he looks forward to spending more time in Florida.

Not gonna happen, but a man can dream.

I can totally see that happening. His deterioration is progressing right in front of our eyes. He can barely track what happens from one day to the next. He’s being propped up by his minions and handlers, and all the motivation for winning the election is coming from them. Donny sometimes tries his best to put on a good show, but often fails (like in this interview). He occasionally realizes he doesn’t like an outcome (like the Tulsa rally) and takes it out on said minions, but doesn’t have the leadership or wherewithal to plan a replacement who will do better.

None of the policy priorities the administration is pushing right now are coming from him. They are coming from his close toadies - Miller, Barr, Pompeo - and they don’t seem to coordinate, so they are disjointed and mostly incoherent. They will ramp up the intensity of the effort to get him re-elected, but they are leaderless and not working together in a coordinated fashion, so I wouldn’t expect to have great results, either. They will be painful and cruel, but still not have very much effect on the outcome.

Of course, the one thing that could pull this election together for him is, perversely, what most of us want - for the pandemic to come under control and for the real economy - actual living wage jobs for regular Americans - to return to some semblance of OK-ness. But there is no sign of that from the administration. They are going all-in on the opposite - make the pandemic worse and crash the economy harder - because that’s all they know how to do.

Trump said during the weird interview with Hannity that Vice President Joe Biden “is going to be president because some people don’t love me.”

Trump missed his calling. He could have been a muse for Bob Dylan.

…they don’t seem to coordinate, so they are disjointed and mostly incoherent. They will ramp up the intensity of the effort to get him re-elected, but they are leaderless and not working together in a coordinated fashion, so I wouldn’t expect to have great results, either. They will be painful and cruel, but still not have very much effect on the outcome.

“Goofs”? He spouted gibberish in a rambling, stream-of-consciousness response to one of the most basic questions a presidential candidate could be asked, completely unable to remotely address the question. Even for Trump this was bad.

Of course, even if he was able to answer questions and was coherent, he couldn’t answer a question about his priorities. First, because he doesn’t have plans, and second because all he’s ever had was a series of “promises” made during his campaign, which he’s largely failed to fulfill (e.g. The Wall, jailing Hillary). He can’t bring those up as priorities, because it would just draw attention to the fact that reality got in the way of his core campaign promises.

I’m starting to get the vibe that he actually doesn’t want to be re-elected.

That’s almost certainly true, given he didn’t want to be elected in the first place. But yeah, he can’t admit defeat, so he may not make that much of an effort to stay in power, but he’ll do his best to totally fuck things up as he leaves.

He responds with word salad because the question was too long and complex.

Yeah, he lost track of the question, no doubt. But Trump is still unable to answer the question of what he’d do in a second term. He had no idea, fundamentally. If forced to (try to) answer that question, he’d spout some different gibberish about how the economy was going to do really well and how great everything would be.

That’s the weird thing about Trump’s attacks on his former staff - because he can’t admit he makes mistakes, he usually says, “That guy was always a stupid, crazy loser, but I decided to give him a chance and hire him.” It’s like he has no idea how bad he looks in that scenario.

I’m starting to get the vibe that he actually doesn’t want to be re-elected.

Trump enjoys all the pomp and adulation that comes with the title of President, but has never wanted the responsibility of actually Presidenting (to coin a verb).

To borrow this writer’s description, he’s the anti-Spiderman 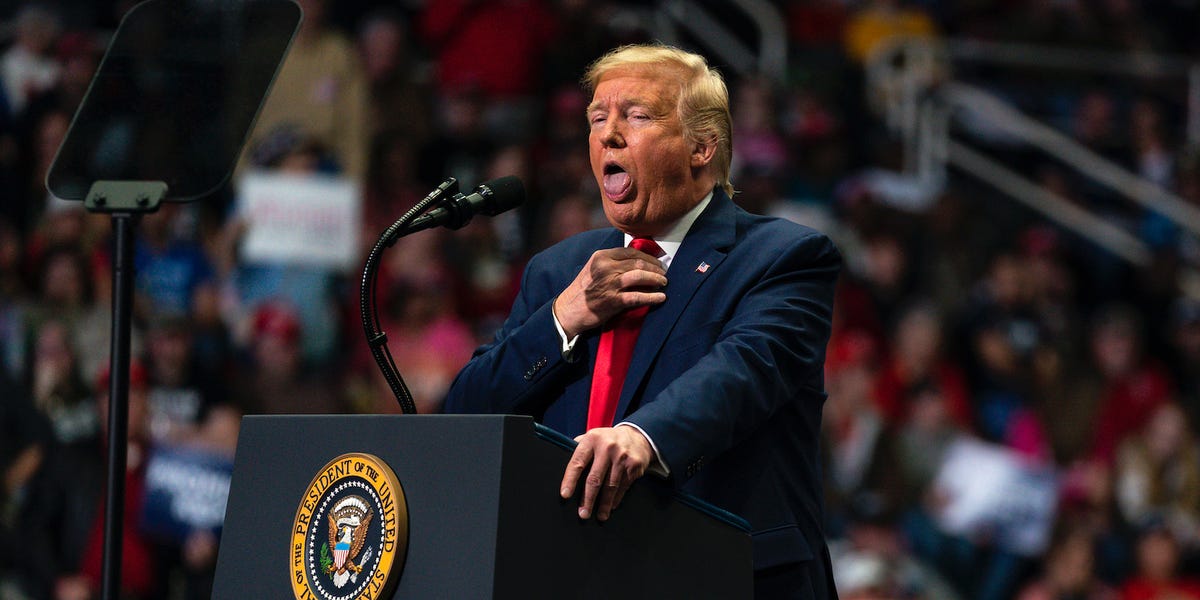 Donald Trump is the anti-Spider-Man 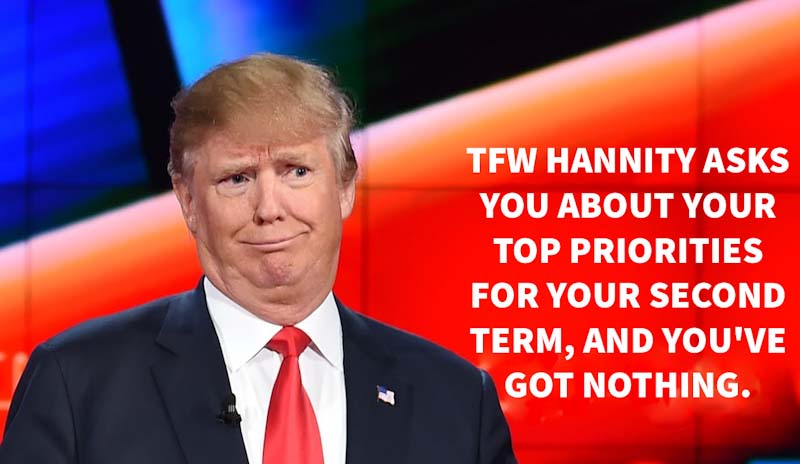