Sorta gave me the impression that they don’t like Ted Cruz.

Now the damned keyboard is sticky with beer…freakin beer everywhere…

A Cruz super-PAC should repurpose this ad with new voiceover:

Ted Cruz. He’ll take us back to 1914, get rid of liberal Sesame Street, and can extrude his nose into sausages. Vote Ted.

extrude his nose into sausages.

Can we get this as a GIF with a flicking index finger? 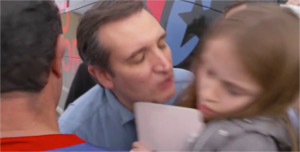 Even Ted Cruz’s Daughter Is Scared of Him

While trying to execute a basic human subroutine in Iowa, Sen. Ted Cruz ran into a slight snag.

Honesty, given the tone of the Republican race, I’m surprised it isn’t an actual penis.

Is that a real ad for Cruz?

It’s getting so difficult to tell what’s real anymore in this race.

Well, somebody’s putting their Amiga computer to good use.

New Day for America shares (reused?) a phone number with his campaign, which seems a bit sketchy as far a non-coordination issues go (Super PAC actions not supposed to be coordinated with a campaign)

That he could think that would appeal to anyone but a very narrow subset of voters, and not turn off the rest of them completely…

At this point, he’d likely take the support of anyone short of the KKK, and probably even them, too.

If this was Cyriak, his nose’s noses would be growing noses. And kangaroo legs.

I could almost feel sorry for John Kasich. The Republican Party is dearly hoping to nominate and run Cruz under the banner “Ted Cruz: We don’t like him either, but he was the lesser of two evils.” Kasich is struggling to promote the message “Vote ME! I’m clearly the lesser of THREE evils!”