Wearing hockey gear, Putin reacts to FBI director James Comey's firing: 'We have nothing to do with that'

“Look, I have the latest invoice for services right here. No Comey, see? What, do you think we fire opponents in Russia? How quaint.”

NO AMERICAN PRESS in the White House meeting. Only Russian press allowed. Right after firing the guy investigating possible collusion with Russia.

I am nonplussed. I can no longer even. This is not just blatant, it’s a flauntingly blatant FU to the American people.

Wearing hockey gear, Putin reacts to FBI director James Comey’s firing: 'We have nothing to do with that’

Wearing hockey gear, Putin reacts to FBI director James Comey’s firing: ‘We have EVERYTHING to do with that’ 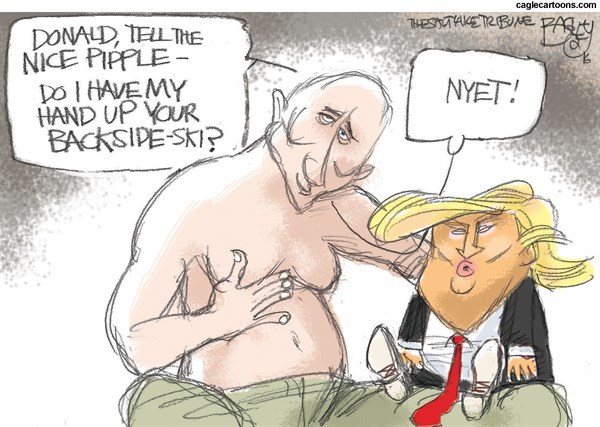 As someone who plays and coaches hockey 4-6 times a week, let me just say that Putin is terrible. It’s actually quite embarrassing to watch those players patronize him.

I’ve heard the same thing – even the professional level players make sure he wins. It’s pathetic.

Looking at that video I’d say it’s hockey. Who would dare body check Putin? Did anyone hard fowl Obama? I wonder how many mulligans Trump gets?

Would you check him? Most of them are just looking at it and thinking “nope. Not worth my life.”

Even repeated hits to the head aren’t going to make a player stupid enough to take that bet.

It’s not the players I find pathetic.

Anyway, Putin must be enjoying all that. Either mission accomplished, or just amazed at how lost they are.

Putin gave a direct, appropriate answer to the question he was asked. I don’t see what’s so bizarre about it- there was no mention of inauguration crowds, one word sentences or requests to the reporter to set up a meeting with Comey for him. It really doesn’t take much for him to look good nowadays.

Uh, I think that he answered a question that he wasn’t asked.

Did anyone hard fowl Obama?

With a frozen chicken?

(Apologies - too hard to resist.)

As someone who plays and coaches hockey 4-6 times a week, let me just say that Putin is terrible. It’s quite embarrassing to watch those players patronize him actually.

Agreed! I play on an old timers league and it drives me nuts to see Putin skating in circles unchallenged. As our sometimes-overwhelmed goalie would often blurt out, “Somebody knock his dick in the dirt!”

where he was unexpectedly seated across from former Secretary of State Henry Kissinger.

A little advice: If you find yourself the President of the United States, embroiled in controversy, having just fired the person investigating your crimes, and are being compared to Nixon, maybe don’t invite Henry Kissinger over for a play date. 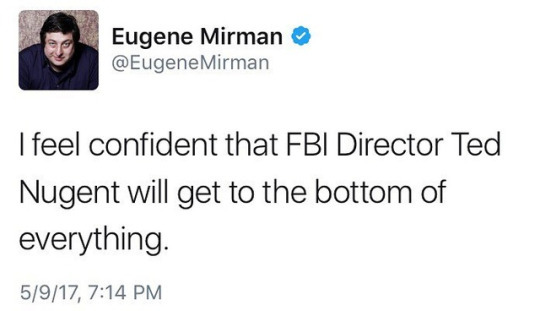 I wouldn’t expect Clayton Kershaw to throw 90 at Obama if he showed up to play at a baseball game*. Nobody could watch that and think that Putin or the players were taking it seriously. That said, the fact that politicians/dictators partake in photo-ops like this at sporting events at all is bothersome.

*I don’t know what Obama’s sport preferences are, I know he never went to a Caps game though.

I have a feeling that sounded more threatening to a native speaker.