On the flipside, imagine having a heart transplant and discovering it came from Cheney.

Well, he was Vice President. No matter what he did to the office while he was there, it still deserves respect.

Why do you think this?

When I see Dick Cheney on the TeeVee, I think “why is he not in jail?”

Throughout the Bush years, I thought that George W. was the bumbling, ideologically blinkered fool. “Sweet” Dick Cheney, we hardly knew you.

Because you respect the rank, not the person.

That’s like respecting the stripes on a Sergeant’s arm. It’s silly. You respect the person filling the rank, not the rank itself. Should the rank ‘Glorious Leader’ be respected also? What about ‘Führer’?

That’s… a staggering statistic. I believe it, but I never thought of it in those terms. Where did you get that? I’d LOVE to trot that out sometime.

I feel like you missed an opportunity to reference dick shooting his buddy on a hunting trip. Something like “It’s like dick shooting friends and having them apologize”. Wait, that’s not a joke that’s a summary of events

I see that. I agree. And I would be happy to lock him up in a highly respectful manner. You can respect the office, and even the person holding the office, and still expect them to be subject to laws.

Can anyone identify the music in this? I love it! Sounds like it’s meant to accompany a silent movie.

I’m sure Cheney knows the locations of way too many skeletons to ever be in serious danger of jail or even mild inconvenience. [How many of those skeletons he helped put there is a question best left unconsidered.]

Dick Cheney: A living, breathing example of the uncanny valley.

In aesthetics, the uncanny valley is a hypothesized relationship between the degree of an object's resemblance to a human being and the emotional response to such an object. The concept of the uncanny valley suggests humanoid objects which appear almost, but not exactly, like real human beings elicit uncanny, or strangely familiar, feelings of eeriness and revulsion in observers. Valley denotes a dip in the human observer's affinity for the replica, a relation that otherwise increases with the Ex...

And yet they’re still giving him the courtesy of pretending he was “wrong” rather than “a liar”. 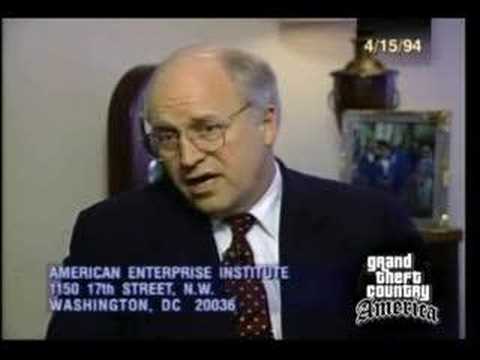 [quote=“pixleshifter, post:26, topic:65281”]
That’s like respecting the stripes on a Sergeant’s arm.
[/quote]Well, according to the Uniform Code of Military Justice, this is a terrible example, because that’s exactly what you have to do when you’re in the military.

Fuhrer really shot himself in the metaphorical foot when he brought disgrace to the title. You might note that nobody’s called themselves that for a while now.

Being made to do something is not respect earned, and that’s the only respect that’s truly respectful.
A title is neutral, commanding neither respect nor disrespect. It’s the person filling that title that gives it the respect or disrespect it deserves.

Really bad example. A mad hatter in a bad dress who thinks they’re God’s best mate on Earth. Most of whom have presided over some of the worst atrocities in human history. No respect for that in the slightest.
What about other titles? Butcher? Baker? Candlestick maker? Tinker? Tailor? Soldier? Spy?
Is every title worthy of respect?
No, it’s the individuals who fill those roles who get the respect they deserve.

Is it too late to air-drop him into Iraq and see if they greet him as a liberator? Donald Trump Thinks His Time at an Expensive Prep School Was Just Like Serving...

Donald Trump never served in the U.S. military—thanks in no small part to medical deferments he received during the Vietnam war—but the Republican hope ...

Because you respect the rank, not the person.

Why should I though?

Well, according to the Uniform Code of Military Justice, this is a terrible example, because that’s exactly what you have to do when you’re in the military.

Yeah but I’m not in the military. I’m the descendant of people who overthrew a king (I had ancestors in both the Revolutionary War and the Civil War).

What a better world it would be if the respected leaders were the people who are currently led.