Originally published at: Why is the Christian Right fascinated with children's books from the 19th Century? | Boing Boing

The answer, he proposes, is that promoters of these recycled works believe that history as a discipline took a wrong turn in the early twentieth century, 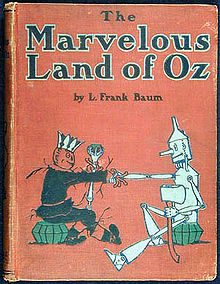 The Marvelous Land of Oz

The Marvelous Land of Oz: Being an Account of the Further Adventures of the Scarecrow and the Tin Woodman, commonly shortened to The Land of Oz, published in July 1904, is the second of L. Frank Baum's books set in the Land of Oz, and the sequel to The Wonderful Wizard of Oz (1900). This and the next 34 Oz books of the famous 40 were illustrated by John R. Neill. The book was made into an episode of The Shirley Temple Show in 1960, and into a Canada/Japan co-produced animated series of the The e...

Written in 1904, the main character is a “boy” who finds out that “he” is a princess (pronouns as used in the book). I read it when I was in primary school, it was in the school library.

Call it Borderer’s law if no-one has already claimed it.

Do you want dystopia or dat topia?

Nostalgia is a key point for fascists, especially white supremacists. Trying to turn back the clock to a time when one required less money/power for their privilege over others.

I’m gonna go out on a limb and say it probably has something to do with reading ability.

Also they’re out of copyright, making for easy reselling.

I suppose the Bible would pass muster. When I first read Leviticus it forbade acts I didn’t even know people did or thought of doing. Do they want kids reading the “Old Testament?”

Just wait until they realise that Eve must have a Y chromosome, because she was created from Adam’s rib.

That’s also the book that has an army of women (an obvious parody of contemporary suffragists) who fail in their revolution because they argue over the color of uniform to wear and other stereotypical female failings. I love the Oz books (I have a set of original printings that’s been in my family for generations, but they were clearly products of their time – I know Ozma has become an icon in the trans community, but I’m pretty sure Baum didn’t mean it that way.

They seem to prefer being told what’s in the bible as opposed to actually reading and interpreting for themselves.

Gregory M. Pfitzer. History Repeating Itself: The Republication of Children’s...

Gregory M. Pfitzer is a historian in the American Studies tradition who specializes in the history of the book. This volume, History Repeating Itself: The Repub

Each chapter of the book follows the same organizational scheme. Pfitzer begins by focusing on a publisher who is reissuing the book(s) of the figure under discussion, then covers the historical figure, and then returns to the publisher, arguing against the reissue. Though Christian publishers claim Goodrich as an advocate of timeless truths about American history, Goodrich was really an innovator who livened up his prose with fictive devices and revised his texts constantly. Though Christian publishers describe the Abbot brothers as paragons of conventional pedagogy, the Abbot brothers turn out to be proto-progressives with an inquiry-based, almost social studies approach to history. Despite Christian publishers’ efforts to appeal to Pollard’s works to justify their subordination of women, Pollard appears instead as an outspoken advocate of women’s rights with a low view of marriage and a high view of public education. Though Christian publishers celebrate the Providential- ism inherent in Coffin’s writings, he turns out to be a Boston public school man whose Anabaptist tendencies and immersion in the child study movement make him an odd spokesman for neo-Calvinist homeschooling anti-progressives. Though Christian publishers use Brooks’s texts to engage in hagiographic hero-worship, Brooks essentially celebrated childhood developmental- ism, autonomy, and critical scrutiny, especially for older children. Finally, and most egregiously, though Christian publishers have appropriated Morris for their Christian America metanarrative, he was actually a secularizing anti-Puritan whose work replaces divine providence with human agency, so much so that republishers have had to bowdlerize his work to make it palatable.

With enough marketing, all things are possible.

I know Ozma has become an icon in the trans community, but I’m pretty sure Baum didn’t mean it that way.

Absolutely, but when you don’t read about people like yourself as a child you tend to feel attachment to anything that resembles your experiences.

There is also a way to read Harry Potter as being about a trans person, but since JKR has turned out to be Petunia Dursley IRL we know that wasn’t what she intended.

I’m pretty sure Baum didn’t mean it that way.

the relation between author and reader is often quite complex - stories are alive, and fickle - and there are plenty of books that wind up being understood far different than the author expected.

i mean just look at the christian bible (!)

the book…has an army of women (an obvious parody of contemporary suffragists) who fail in their revolution because they argue over the color of uniform to wear and other stereotypical female failings.

In this Baum was in step with his times. The growing movement to grant women the right to vote combined with the appearance of the “career woman” scared the pants off the gentlemen of the Status Quo. Late 19th and early 20th century humor magazines ran countless cartoons showing the silly things that would happen if women were to gain equality to men. The alleged humor arose either from showing women doing “masculine” things like wearing top hats and smoking cigars, or from showing women in masculine costume doing “womanly” things, for example female army generals at a strategy meeting holding parasols and daintily drinking tea. It was the same patronizing attitude that was applied in cartoons ridiculing African Americans: mocking inferiors who didn’t know their place, who were putting on airs, who were getting too big for their britches. Of course we don’t have anything like that nowadays. (/s as if it were necessary)