Yes, this is a tactical spork

I think I would feel so much safer with one of these when I go to KFC next; those people who go into meat trances and start shuffling towards me, eyeballing my meat with greedy, vacant eyes really give me the willies.

“Fork over the Spock spork for my horked pork, Mr. Rourke.” 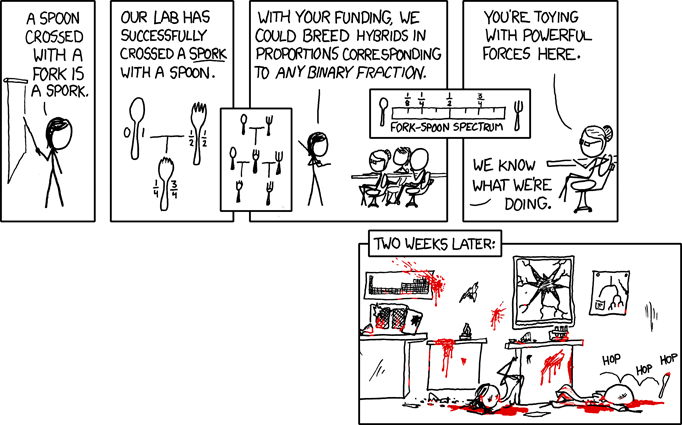 Their biggest mistake was bringing Rachael Ray and Emeril to tour the lab and sign off on the project. That's when Spielberg caught wind of it.

ETA: One of the reasons I really love this particular cartoon is that Randal Munroe so seldom uses color in his tri-weekly comics. The profusion of red in the final panel of this one makes it seem, by contrast, to be positively blood-soaked.

It’s so extreme! they couldn’t get all the extreme! into just one end, so they made both ends extreme!

Looks cool but I have a hard time actually picturing when I would use it. When camping I typically bring a small metal knife or Swiss army knife anyway, and most of the food doesn’t need a fork, so why ditch my big spoon for a knife/spork combo.

Don’t these people know that something “tactical” must be either made of titanium or paracord?

I absolutely love discussions of sporks. Something about sporks brings out both the hate and the creativity. (And gentle love-hate.)

May I direct your attention to this thread from a year ago Good deal on Titanium quasi-spork , with @rossitude’s wonderful one-word reply:

Which inspired my own reply:

Only 15 replies on that other topic? Where was everyone a year ago??

I’d have been way more impressed if this thing had a dinner knife style blade instead.

So, it’s useful at KFC and Golden Corral. Yee ha!

Somehow Charles Simic’s poem “Fork” seems like it should instead have been called “Tactical Spork”.

This strange thing must have crept
Right out of hell.
It resembles a bird’s foot
Worn around the cannibal’s neck.

As you hold it in your hand,
As you stab with it into a piece of meat,
It is possible to imagine the rest of the bird:
Its head which like your fist
Is large, bald, beakless, and blind.

Please tell me this is an ad from the Onion…it hurts my to think that some of me fellow planet dwellers might look at that stupid shit and think Want Buy Pleasure. Why ? What part of the human brain would light up for that? I really just don’t get it. When Maslow was working on the Hierarchy of Needs did he ever in his most fevered moments envision something like this? Did he think about where he could place it… I sure know where I think it could be placed or stuck or shoved.

Fun Fact - the name “KA-BAR” is from a letter from a trapper, who wrote in to say he “killed a bear” with one of their knives. Only the writing was illegible, and “KA BAR” was what the legible part later taken for the name.

Don’t these people know that something “tactical” must be either made of titanium or paracord?

So that’s what tactical nuclear weapons are made of?