Jones’s lawyer asks for a mistrial

if i heard it right, the judge said there have been 17 requests for mistrial now. she even asked the lawyer this last time if he was serious, or if it was “just a thing you threw out there.” lol

she even asked the lawyer this last time if he was serious, or if it was “just a thing you threw out there.” lol

I could be wrong, but after the lawyer replied that he was serious, I’m pretty sure she said “I see” in the same tone of voice I used when my kids told me they had no idea who ate all the cookies.

Jones has lots of money. He could have hired better people.

Who knew that when you’re pretending to be bankrupt, hiring extra cheap lawyers is one part of the act you should skip?

i have never laughed watching a court proceeding before. that poor judge. i imagine her thinking, “i put on my robe for this!?”

sigh i do feel bad for those poor families. to think that they have finally begun to get justice, and still they have to deal with the total disdain and incompetence of jones and his lawyers. i hope they get some sort of closure from this

During discovery he sent years worth of Jones’ text messages to the plaintiff, providing unambiguous evidence of perjury

One person’s “incompetence” is another person’s “complying with disclosure.” Sounds like Jones’ lawyer didn’t want to obstruct justice or fail to disclose evidence.

The families obtained a $73 million settlement with Remington, which means, relatively speaking, cash on the barrel (i.e. no appeals like AJ will waste everyone’s time with). It can never replace their loss, but it can hopefully put them on something of an even keel with AJ. My feeling is the damages phase in this trial is less about compensation and more about the process of bankrupting AJ. And to that I say, Dogspeed. 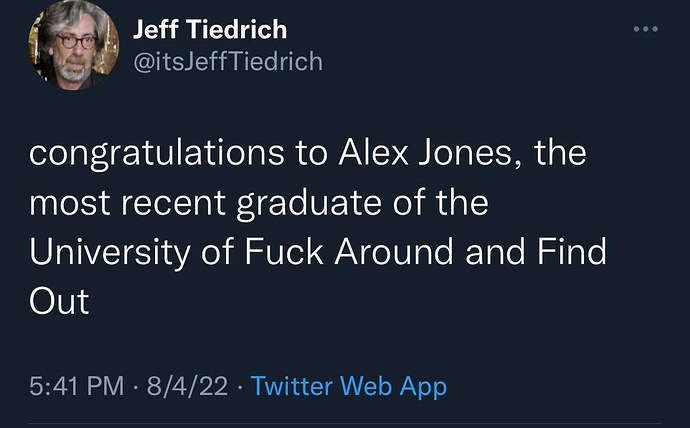 I was talking about compensatory damages. Obviously punitive damages and fines are a different matter.

Btw. we have a very similar system here in Germany except that it applies only to fines imposed by courts which doesn’t include plain speeding tickets.

I was talking about compensatory damages. Obviously punitive damages and fines are a different matter.

That was my mistake - I lost track of which was being discussed.

I get that it doesn’t always work that way in real life, but shouldn’t compensatory damages be completely independent of his finances?

Unless the court believes in eternal god-given laws, the sense of ‘justice’ is often made up as we go along. If we do not make this stuff up, and agree on it, then where does it come from? A good law gives a nice, clear answer that most people agree with in the majority of cases. Where there is doubt, we can go to case law, and ask ‘what did people do before with something like this?’ and ‘did it work?’. And once in a while, we get a case that is so unusual that there is no clear precedent.

What do the ‘compensatory damages’ do? If they are supposed to make good all that Alex Jones ever did, then there should be a fixed sum for the deed. If Alex Jones can produce the sum from his production company, and carry straight on, maybe we have to try a bit harder. If we are hoping for some redemptive effect on Alex Jones, we will certainly have to try a lot harder. The only thing we should not do according to current thinking (and this was different in other ages) is to go for revenge.

Fun fact, the diminutive of Vladimir is typically Vova. So Thanks Vova is more appropriate.

There are still a bunch of families in CT awaiting damages. This was only 2 of them.

regarding Punitive Damages in this particular case: This is in Texas and there are caps on what multiplier can be used for them. POPEHAT had a somewhat informative Twitter thread about it yesterday and it appears that anything outside of 2-9X the Compensatory Damages is either not allowed or grounds for an Appeal. Also- the Jury decision has to be UNANIMOUS and the Compensatory Damages were only agreed to by 10/12 jurors.

They will probably come to a decision today but regardless of what it is, many people are going to be very disappointed I think. I do wish the Judge would issue a Gag Order on him so he stops talking about it outside the Courtroom.

Exactly. Otherwise fines are not a deterrent. Just the cost of doing something poors can’t.

If he’d paused long enough at any point in the last few years to take the second worst available course of action he probably wouldn’t be here,

He decided a default judgement against him would be less bad than handing over his records in discovery, and then accidentally handed over all his records anyway.

Thanks for the link. I love Ken.

From what I’m hearing, the punitive damages won’t be astronomical. But I suspect the real punishment for Jones is going to be the consequences of that phone dump. His ex-wife, the Jan 06 committee, the 2 other lawsuits from parents of victims of the Sandy Hook elementary massacre. An ocean of consequences.

Jones has lots of money. He could have hired better people.

I’m not going to check, but I have no doubt that he’s rotated through a series of law teams, either fired in a fit of Jones pique or they withdrew at high speed.

I think Reynal is like the 11th one. The judge has warned him that he is responsible for the actions of the attorneys before him. He doesn’t get to claim he isn’t just bc he is late to the party

Is it the same jury for punitive damages?