Christ these people are stupid.

I’ve taken to calling them the Recessive Traitors.

Oh my, from the article:

Minutes after the House voted to impeach him for a second time, Trump held a private ceremony in the Oval Office to award the National Medal of Arts to country singer Toby Keith, a senior administration official said.

Some years ago, at our yearly Las Vegas tradeshow visit, one of our crew had his 50th birthday party at “Toby Keith’s I Love This Bar & Grill” in Harrah’s. We had the little glass walled function room so could peer out at the rabble watching the band. We also had a $50 Elvis impersonator in a rhinestone jumpsuit who, having exhausted his repertoire of Elvis songs, switched to tunes by U2 and others. Even these were punctuated with Johnny Bravo style karate kicks. He was the best thing about the whole week there, and when we gave him $200 to stop he tried to give us change

Ahead of the shindig I perused FourSquare for reviews of this place, what I found pretty much sums up why Trumpy boy would give him a medal:

“I hate this bar and grill.”

“Best place in Vegas to yell “Yee-hah!”, and act like a redneck…”

“Warning: This is not a place where black people should go.”

“This bar is everything that’s wrong with America.”

Stun guns, 'stinger whips' and a crossbow: What police found on the Capitol protesters. yhoo.it/2XGNsBO https://t.co/3ASqIWfoDr

Remember back in the summer when a police force tried to convince people that an empty can of White Claw was a deadly weapon?

Per @MSNBC, Republican Senate staffers are telling their bosses that if they don’t vote to convict Trump, they will resign en masse because they were also the ones barricaded in offices, hiding under desks, fearing for their lives for hours on end #ImpeachmentDay

Yeah, but these are white right wing racists and Nazis. So obviously they were just worried about self-defense.

That would be amazing!!!
I would much rather they vote to convict, but if they fail to do that and then there’s a massive walk-out of their staffs, that would cut the sting a tiny bit. 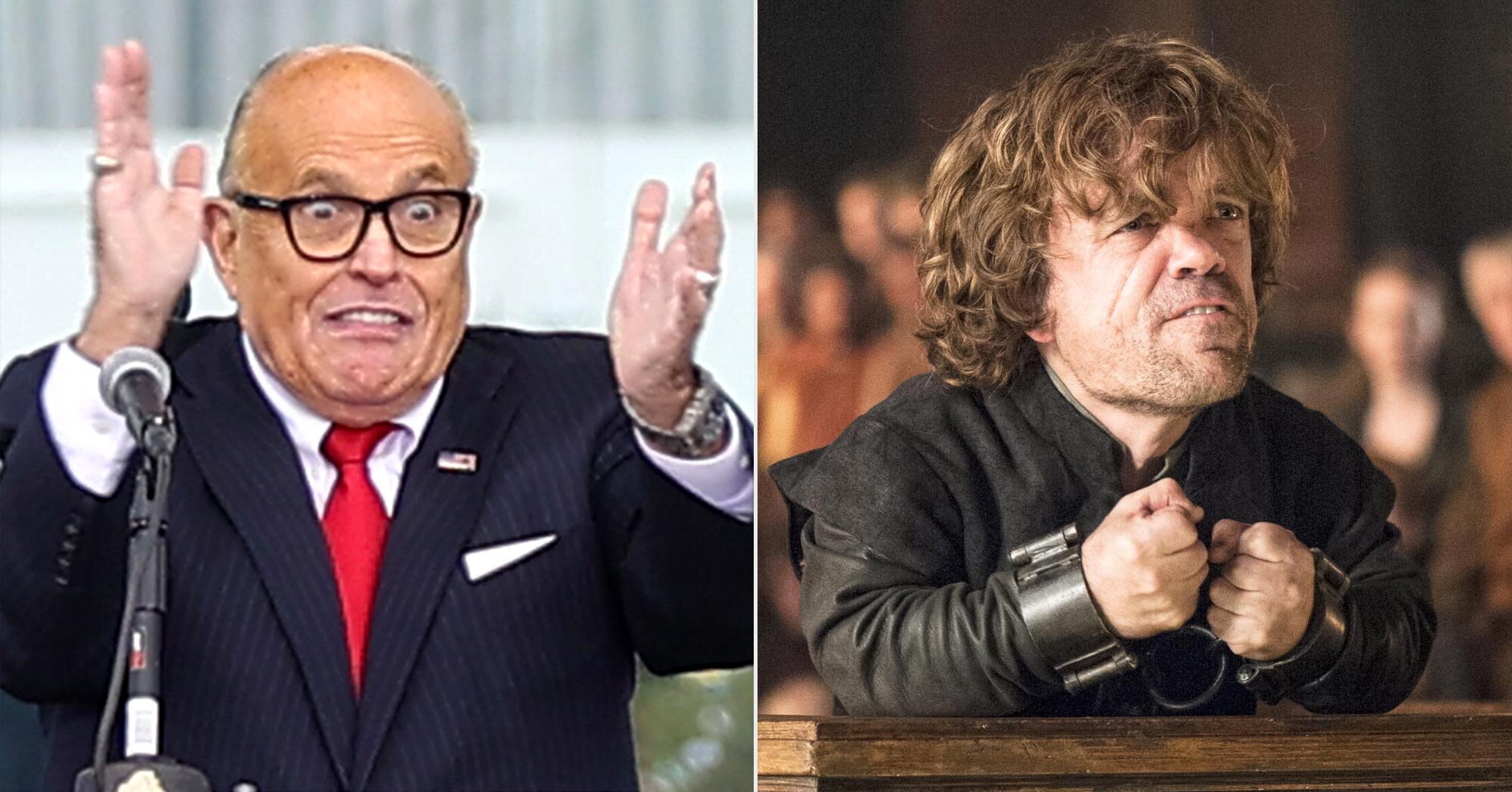 There’s not much I wouldn’t do if Peter Dinklage asked me, but I think Rudes might be getting desperate.

Are they deplorable yet?

“I was referencing the kind of trial that took place for Tyrion in that very famous documentary about fictitious medieval England,”

eta: I have my doubts that he’s ever really watched it. He probably did a search on “trial by combat” when he was making up his excuse, and picked a hip cultural reference.

Here we are, right after the recent Giulani fluff, this was the first hit:

A trial by combat is a means by which a party can prove their innocence when accused of a crime in the Seven Kingdoms. In lieu of a standard trial where a lord - or a council of them - hears testimony from the involved parties and makes a ruling, one...

Behind The Fallen Capitol, A Government In Ruins

This Week in the Swamp: A weekly dive into the muck of the Trump administration.

We can only hope that President Donald Trump will be out of the White House by this time next week.

There’s a chance he won’t. As my colleagues and I have reported both prior to and since last week’s mob attack on the Capitol — for which Trump recruited participants and then issued marching orders — danger remains of future insurrectionary activity in defiance of the Constitution and the will of the voters.

His son allegedly bragged about being part of the riot.

Are they deplorable yet?

You want headlines? I got one:

Some Democrats in Congress are worried their colleagues might kill them

Not in recent times.

Report: Dozens On FBI's Terrorist Watch List In DC On Day Of Insurrection

In another seeming intelligence lapse, dozens of people on the FBI’s terrorist watch list were in Washington D.C. on the...

I mean, damn, all those “Antifa and others, steer clear on the 6th, leave them to the police” messages posted here well in advance, and it turns out that law enforcement were asleep at the stick.