Her accusations reported by the Union in April of 2019 would have received more attention had she included the sexual assault.

So what do we do? Biden is not on trial, and nobody is threatening to put him in jail. If Biden wanted to do crossword puzzles sitting in his porch rocker for the next 4 years, I’d say good for him - he gets to impose his desired reality on the rest of the world, deny it happened, and go on with his life.

But that’s not what’s going on. Biden is asking to be made president of the united states, and he, and his party, does not get to impose his desired reality on the rest of us and ignore this thing. The proper thing to do would be to withdraw, and if he did not do the proper thing the DNC should have imposed it on him. Instead we go into the general election with not only a sex scandal on his score card but a national party convivial, just like a fucking Republicans.

sure - and if she had video footage, that would have received a lot more attention too. The fact is the feelings around what to do when your in her position are complicated, painful, and you may not make the best choice for your media presentation when you are acting to limit your pain. Faulting her for such is just lacking empathy.

The proper thing to do would be to withdraw

Even if he didn’t do it?

I absolutely agree Biden should withdraw.
Shit happens to all of us. What defines you as a person isn’t the shit, but the choices we make after the shit. When given the opportunity to make a difference she chose to tell a story about Joe’s lingering hand on her shoulder, and how shell felt humiliated because he thought she was attractive asked her to serve drinks. That’s just not going to move the needle, it’s too easy for many people to be dismissive of this story. Now after the primaries are over she chose to tell the world that Joe held her up against the wall and put his fingers inside her. What, that is shocking and despicable! I’m sorry but fuck that, stakes are too high the only thing this accomplishes now is helping Trump win reelection.

What we can’t do with a straight face or any sense of honor is do both depending on who is involved on either side of the accusation.

But that’s nothing new. 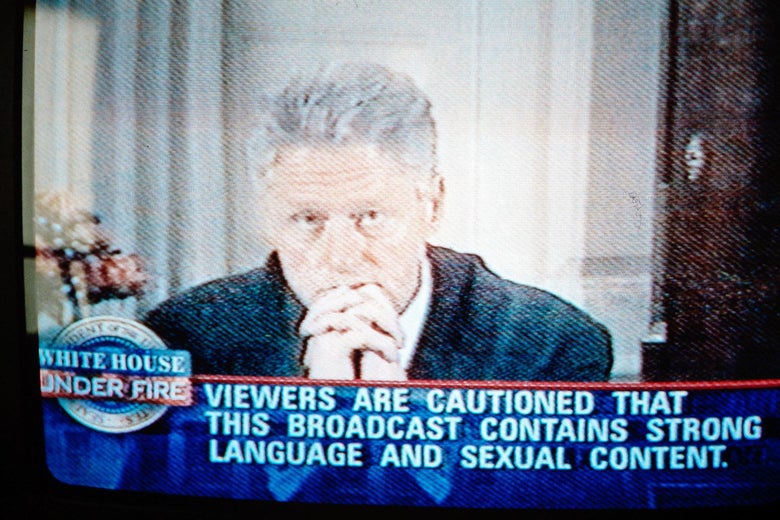 The Clinton Impeachment Saga Was Crazier Than We Remember. Welcome to Slow...

Two decades later, it’s time to look back at Bill Clinton, Monica Lewinsky, and the scandal that nearly ended a presidency.

Even if he didn’t do it?

The whole point is that we can’t know that he didn’t do it. So yeah, he should step down. And if the unknowable truth is he didn’t do it, well then I’m sorry Joe, sometimes bad shit happens to people, you included.

Isn’t that the outcome that we all argued for with Kavanaugh? Or why did we make such a fuss if we were going to say “but even if he didn’t do it?”.

I’m sorry but fuck that, stakes are too high the only thing this accomplishes now is helping Trump win reelection.

I agree that this is true. But the fault for that lies with Biden who should have considered the possible outcomes of this accusation and done the right thing by dropping out.

The whole point is that we can’t know that he didn’t do it. So yeah, he should step down.

That’s bananas. You’re saying that he should step down even if he knows he didn’t do it, simply because it’s impossible to prove a negative.

Isn’t that the outcome that we all argued for with Kavanaugh?

No. I thought it was Kavanaugh’s response to the accusations that demonstrated he was unfit to be a SCOTUS justice.

Also, for what it’s worth Dr. Ford’s accusation against Kavanaugh had more supporting evidence than this accusation against Biden. For one thing, Dr. Ford told the same story she eventually shared under oath with others (including her therapist) years before Kavanaugh was in the national spotlight as a contender for a SCOTUS seat. Dr. Ford’s version of events was also consistent throughout the whole ordeal.

Tara Reade shared her story with her family immediately following the alleged attack.

She shared it with her mother, her brother, and a friend shortly after it happened, so it has this same validation as Blasey Ford.

You’re saying that he should step down even if he knows he didn’t do it, simply because it’s impossible to prove a negative.

No - he should step down because he knows how it will ruin his campaign.

No. I thought it was Kavanaugh’s response to the accusations that demonstrated he was unfit to be a SCOTUS justice.

His response was embarrassing, unhinged, immature - but no, that’s not why. It’s because of 1. The strong possibility that he did in fact have this bad behavior, and 2. The strong possibility that he was lying about it. That’s why he can’t be a justice, and that’s why Biden can’t be a president. If Biden is innocent it’s a shame, but with a credible accusation it’s just too risky that we’ll end up with a lying rapist as president.

And I think the only formal mechanism that exists for this to be properly investigated is for Reade to file a lawsuit against Biden. That’s the only way I can see to get real answers.

That is really where the rubber hits the road. Where parties are telling their story under penalties of perjury in a semi public forum.

so it has this same validation as Blasey Ford.

When Reade is willing to give the story under oath, then it has the same validation as Blasey Ford. Until then, there is zero risk in making up a story.

When Reade is willing to give the story under oath, then it has the same validation as Blasey Ford. Until then, there is zero risk in making up a story.

And so for Biden as well.

There is no shortage of shysters working for right wingnut welfare. If Reade wanted to sue Biden, there are more than enough people willing to pay for the representation or doing it for free (for fundraising purposes).

And Biden is free to sue Reade for defaming him. Why is he not doing that, rushing to make his statement under oath?

Your “test” goes both ways. You can’t seriously hang a position on this. This is a republican argument for ignoring women’s statements.

Except that looks petty and Trumpish. Like he is trying to silence her or legally beating her up. The optics of that would be very bad. Democrats still care about optics.

Really? If they cared about optics Biden would be out. Whether he sues for defamation or not he looks pretty “Trumpish” as you put it.

You are certainly entitled to your opinion.

Frankly I find most outrage against Democrats exaggerated and tend to do nothing more than deflect from the wild excesses of a Republican party which has stopped giving a fuck about propriety, rule of law or even basic facts.