Ethically challenged former US Congressperson Newt Gingrich has proclaimed Donald Trump a liar. Gingrich claims there are no tapes of Trump strong-arming former FBI Director James Comey, it was an uncalculated bluff.

President Trump is supposed to reveal this week, six weeks after making the initial suggestion, whether he actually has tapes of his White House conversations. Trump last month wielded those potential tapes as a very thinly veiled threat against former FBI director James B. Comey. And ever since then, he and the White House have decided to withhold the truth from the American people, refusing to answer a simple yes-or-no question.

But Newt Gingrich just gave away the game, for all intents and purposes. In an interview with the Associated Press, the Trump-backing former House speaker basically admits that Trump was just bluffing to try to get inside Comey's head.

“I think he was in his way instinctively trying to rattle Comey,” Gingrich said. “He's not a professional politician. He doesn't come back and think about Nixon and Watergate. His instinct is: 'I'll outbluff you.'”

Ah, Gingrich, the prototypical bitter Libertarian HS debate club nerd. Intellectual dishonesty is second nature to him and his political progeny. “He was just bluffing, like a real Murican businessman. It’s ok!”

Apparently not being a “professional politician” is a license for dishonesty

To a politician being a politician is a license for dishonesty, being a “professional politician” is about the ability to lie in a way that can conceivably be interpreted as not exactly a lie.

Interesting…so, it’s OK to bluff, but not OK to lie. Probably this is because bluffing is what good business people do, and lying is what nasty politicians do.

To a politician being a politician is a license for dishonesty, being a “professional politician” is about the ability to lie in a way that can conceivably be interpreted as not exactly a lie.

yes. Lawyers generally try to imply, rather than lie. At some level, I think we’re supposed to find the fact that Trump cares not one fuckwit whether he is caught lying or not refreshingly different.

He’s still bullshitting with his response by implying that maybe just maybe there are tapes. Somewhere. Tapes.

“With all of the recently reported electronic surveillance, intercepts, unmasking and illegal leaking of information, I have no idea whether there are ‘tapes’ or recordings of my conversations with James Comey, but I did not make, and do not have, any such recordings,” 45

Because in the minds of conservatives, it’s Us Real Americans vs. Them Evil Liberals, and until you can change that, it doesn’t matter if someone lies, as long as they are part of Us Real Americans.

Being an amateur politician is why it is so easy to catch the lies.

A professional politician is much better at all the fancy weasel words that sound like they kind of mean what you hope to hear, but could actually mostly fit the facts.

“He is new at this, give him time and he will lie so much better”

And I look forward to eventually finding out that Gingrich was somehow involved in all of this, there were tapes, and that the Trump administration destroyed them. I’d give it about a 75% chance.

Interesting…so, it’s OK to bluff, but not OK to lie.

What’s the point of even “bluffing” here? To try to intimidate Comey into not revealing anything? In some ways that’s even worse. Maybe now we can add witness tampering to the list of illegal things Trump has done.

A number of reporters came forward talking about how Trump would get angry with how they quoted him and at least imply that he had tapes of the conversation in an attempt to intimidate them into doing what he wanted - in all cases, it was a lie. So this is very much a pattern of behavior on Trump’s part.

“I think he was in his way instinctively trying to rattle Comey,” Gingrich said. “He’s not a professional politician."

I don’t understand Trump’s apologists saying, “Hey, his irrational and possibly illegal behavior was merely a gut instinct, because he has absolutely no idea what he’s doing!” That seems like it’s really not helping him.

Aren’t “tapes” kind of like the floppy drives Kushner was warning us about?

I just want to point out that trump admits lying about the tapes nearly simultaneous to the senate TEAGOP revealing the details of their “Better Healthcare Reconciliation Plan” (which I think should be referred to as “bittercare”). That’s some professional politician shit right there.

So if I’m tracking things right, Gingrich has put forth some public spin that there are no tapes just as Trump approaches the deadline to release said tapes. This is pretty brilliant. By begging dishonesty and inexperience on the part of Trump he makes the statement sound at once honest and backstabbing. So, if there really are tapes, his statement goes a long way towards establishing the line that no such tapes exist.
Edit to add obvious subtext: Perhaps the tapes exist and demonstrate that Trump did indeed obstruct justice. If so, a statement like this from Newt makes perfect sense.

What’s the point of even “bluffing” here? To try to intimidate Comey into not revealing anything? In some ways that’s even worse.

I found the whole “tapes” thing confusing, too. If Comey was telling the truth, he would welcome tapes that revealed what was said in his conversation with Trump. If Comey was lying, wouldn’t Trump have revealed these tapes to prove it? (Or was he actually just trying to sweat Comey?)

Anyway, now he’s admitting (admitting?) there are no tapes: 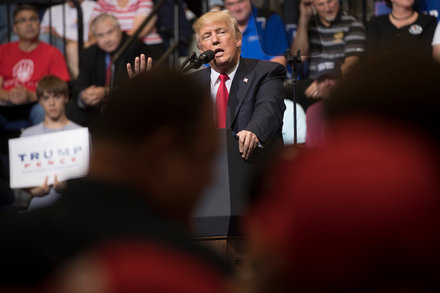 Trump Says He Did Not Tape Comey Conversations

After weeks of speculation over his suggestion that his talks with the F.B.I. director might have been recorded, the president said they were not.