Next he’ll be attacking the sun for being part of the “make Trump look orange” conspiracy. Maybe that’s why he hates solar power. 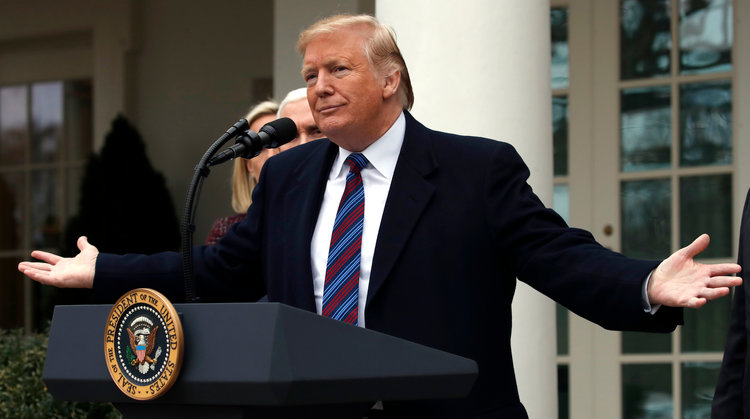 Ironically, it is incandescent bulbs that throw a yellow or orange glow. LEDs usually have a whiter light, though many of them you can program to be different colors.

The fluorescent throw a blue light that really drain color out of things. I remember being shocked when my teacher showed how my painting looking in the studio with natural light, vs in the hall under fluorescent.

My goodness, he is such a megalomaniac. Even the flipping light bulbs are about him. I actually can’t believe I am witnessing this madness.

It’s bizarre. I just don’t understand why so many people continue to worship this buffoon. Lots of people! There are so many fools out there that the possibility of him getting re-elected is a genuine risk.

Yeah, I don’t get it. I guess they are so jaundiced (yellow not orange, hehe) by his political potions he holds they don’t care he is beyond toxic. I seriously hope the attorney generals filet him once he is out of office. 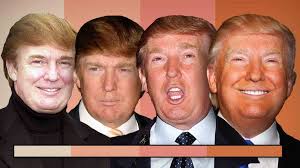 good fluorescent will give a good rendition of daylight.

I’m sure that’s possible, but apart from high-end grow lights, I’ve not yet seen that to be even remotely true.

I’ve heard that so often, but any type of “energy saving light bulbs” which were supposed to last long did not, Admittedly, I haven’t made the full switch to LED yet, but as of now I’m underwhelmed. I’m a total believer in LED for flashlights and have a couple of bulbs which are in reality LEDs, but the latter don’t give a very good light. Not only compared to incandescent bulbs, but sunlight, as simulated by the special lamps used to alleviate winter “depression”.

And yes, incandescent Light bulbs have actually been banned in the EU.

Energy-sucking is also only partly true. The few terawatts saved here get wasted because people leav the light on or have vacuum and mowing robots doing their thing each night.

Incandescent bulbs generate a continuous spectrum, every frequency in the visible range (with some variation causing the “temperature” differences), while LED and CFL bulb spectrums consist of distinct frequency bands. It’s a result of how they generate light (blackbody vs stimulated emission).

The bands are tuned so that the lights still appear the same color, so generally it’s ok. It only becomes an issue if you have something that acts like a prism, splitting up the spectrum (strong glasses, camera lenses, etc).

Ironically, it is incandescent bulbs that throw a yellow or orange glow. LEDs usually have a whiter light, though many of them you can program to be different colors.

The fluorescent throw a blue light that really drain color out of things. I remember being shocked when my teacher showed how my painting looking in the studio with natural light, vs in the hall under fluorescent.

I find this all to be quite amusing. It’s as if most people don’t know how light bulbs work.

Incandescent bulbs make a color that’s dependent upon the filament temperature, which is the ratio of the operating voltage to the design voltage. The spectrum is a continuum, peaking in the yellow. It tends to the orange as the voltage is lowered. You’d think that T would be griping about incandescent bulbs making him look orange!

Fluorescent bulbs use blue and yellow phosphors to convert the UV light emitted by the mercury plasma inside to visible light. The color of the light they emit is a function of the composition and relative quantity of those two phosphors in the tube coating. There are two broad spectral peaks, so they can’t render all colors equally well.

LED bulbs have a blue LED with a yellow phosphor. Again, there is control over the yellow phosphor in relation to the blue light from the LED. The blue peak is narrower than the yellow peak, again making it not good at lighting all colors of object.

Both fluorescent and LED bulbs are available in a wide variety of white color temperature variations, from cool to daylight to warm white. Yet they can’t attain exactly the same color balance as that from an incandescent bulb, given the way that they make light.

No - just Nuclear. The cost is 4.5/c per kw/h and another 2/c roughly transmission cost.]

If I chose the wind power plant I’d be paying closer to 12/c or more.

Depending on your climate energy saving bulbs may not be. The heat incandescent bulbs produce may be useful in your home, and depending on where your heating and electricity comes from incandescent bulbs may be more ecologically friendly. But, more or less banned in Canada anyway. I’m happy with the LED bulbs, but, at least for Canada, this may have been more of a feel good exercise than something productive. https://www.cbc.ca/news/canada/manitoba/efficient-lighting-equals-higher-heat-bills-study-1.856047

FLuorescent bulbs could have more than two phosphors, like the 865 and 954 lamps that have three so have a better rendition of reddish colours.
An interesting effect is also that incandescent had an high IR content where LED lights have a much lower IR content, so in some cases an IR camera that worked well with a 25W incandescent, doesn’t work well with a 10W Led lamp that look much brighter at the naked eye.

Add the trash panda to the Trumpster fire.

I’ve heard that so often, but any type of “energy saving light bulbs” which were supposed to last long did not,

It depend of the building quality of bulbs. Latter CFL are quite bad especially if not brand name, and also chepa LED 220V lamps have an high failure rate. On the other hand I have classic fluorescent tubes that I changed because they become faint after 15 years of constant use. 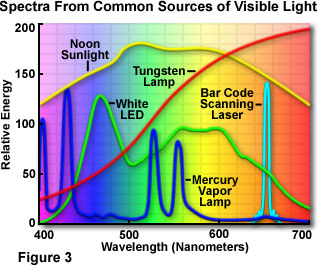 Just because I love graphs.

Everything else he said in that speech was fucking inane/insane, too.

Tungsten light looks more orange the more you dim it. Full on without filters it’s a warm light with a color temperature of 3200K.

Yeah, I mean there’s a clear option if you want things to look more orange…

I just don’t understand why so many people continue to worship this buffoon.

They really like the racism and right-wing authoritarianism. That’s the horror of it.

I’m down an average of 250kw a month from last year, so why the hell would I go back?

Remember also if you live in a warmer climate, since LEDs run cool, you also save on cooling cost. In colder climates you still save somewhat if you do not heat with resistance electric heaters, but not as much.

That’s a good chart, but there’s actually a large amount of variation in the spectrum and “banding” of different modern LED lamps as well. My wife has really gotten into studying the relationship between color temperature and sleep (most people know these days that too much blue light exposure at night is bad) and took the following images of various light sources around our hose with her spectrometer. Many of the good LED lamps are very similar in visible spectrum to old incandescents. 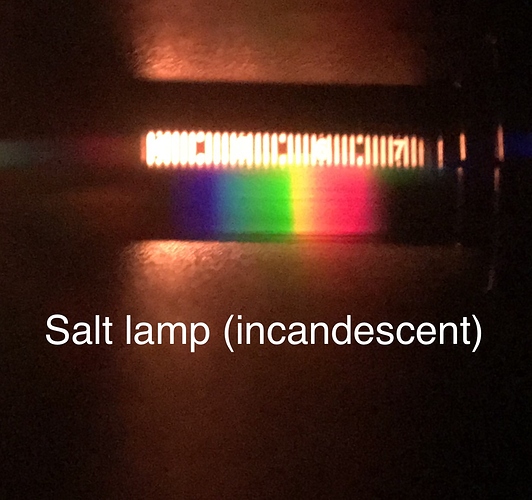 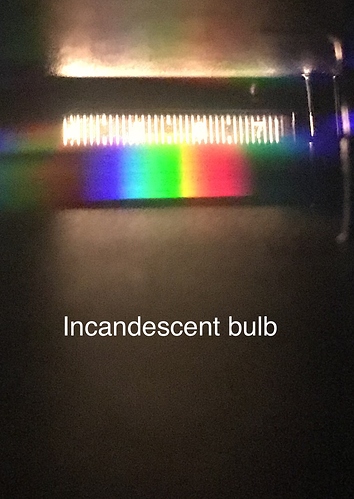 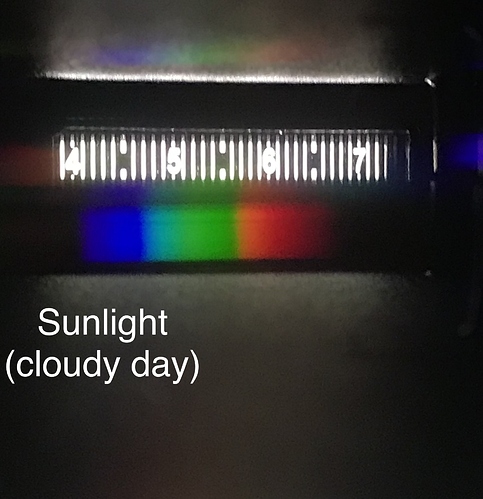 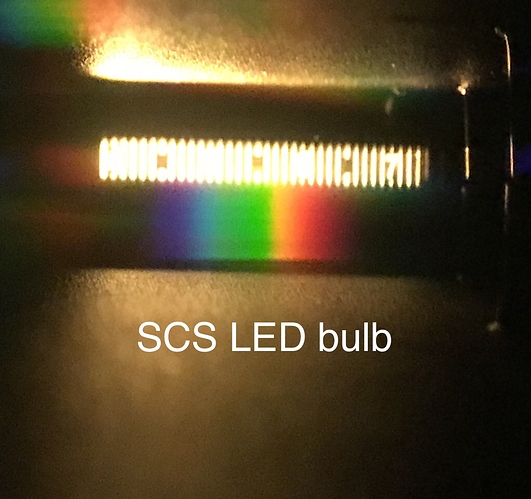 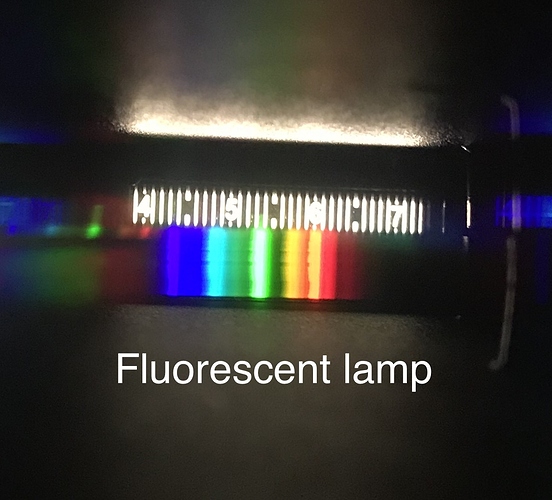