Susan Rice’s odds have shot up substantially in the betting market today:

Maybe related to the rumors sparked by the convention speakers schedule? 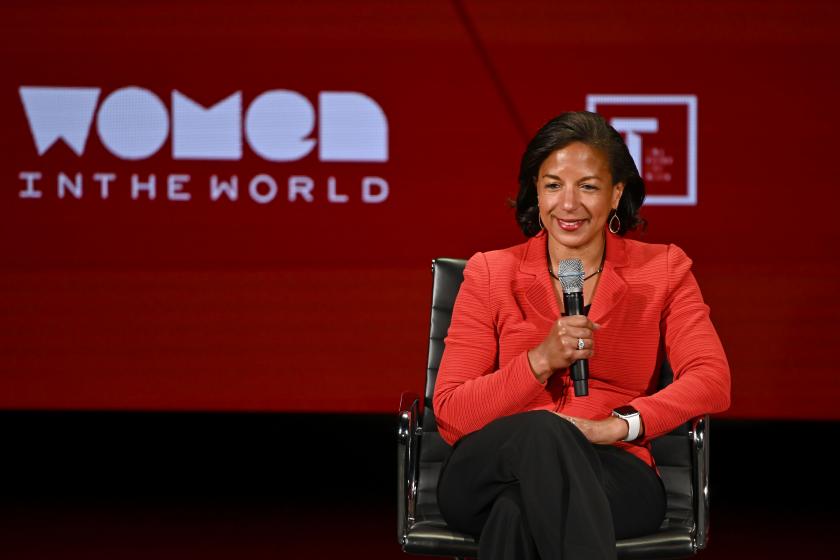 Democrats announced the lineup of speakers at next week's Democratic National Convention on Tuesday, and all the usual suspects are included — former President Barack Obama, Sen. Bernie Sanders (I-Vt.), and several ex-presidential candidates, like...

I’m the god damn enemy and part of the problem. Ofc I am.

Absolutely not. You’re not the enemy. I’m assuming good faith on your part, and I’d be willing to bet that the folks you’re discussing this with assume your good faith as well. All I’m saying is that you may want to consider whether the cherry-picking you didn’t like applied to you might be worth considering when looking at other folks’ sentiments as well.

I had a fucking heart attack a week and a half ago. I knew I should have stayed away from here.

“The left position is you rarely support anyone. You vote against the worst. You keep the pressure and activism going.” – Noam Chomsky

The most likely counter to Biden choosing a woman of color would be Nicky Haley.

Susan Rice’s odds have shot up substantially in the betting market today:

Maybe they just made the official announcement and I missed it, but I just checked that betting site again and now was showing 97% odds in favor of Harris just before crashing. So someone must know something. 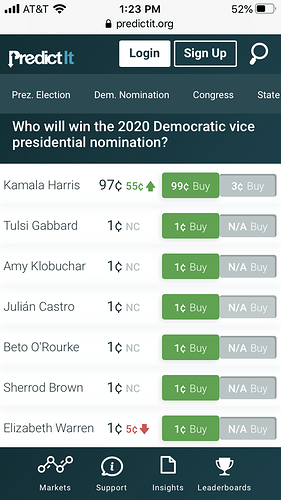 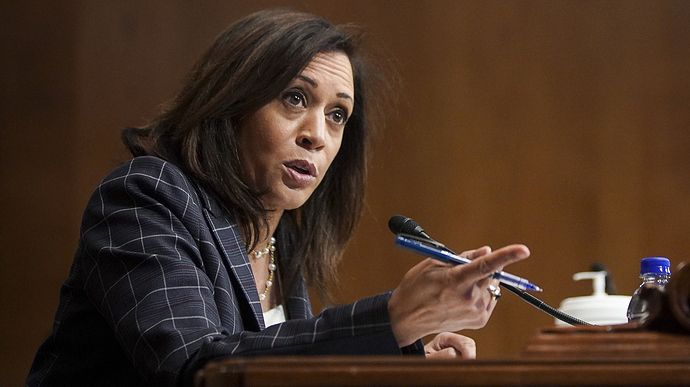 In Historic Pick, Joe Biden Taps Kamala Harris To Be His Running Mate

The selection will make Harris just the third woman — and first African American — to be nominated for vice president by a major political party.

ETA: Ha, saw your update just as I was posting!

But there would be a little less stink in the joint if he chose a progressive who actually places, say, racial justice above supporting police forces that are grounded in large part in white supremacy and serving the wealthy.

So much for that, I guess.

When it comes to Biden, expect the expected. Oh well.

ETA: Like I said above, she has her strengths, too. We just have to prepare for the Republicans and Putin to exploit her history and can’t realistically expect her to attract younger and more progressive people to the polls.

that’s not a measurement of unity on the right

I was really hoping for Stacey Abrams…

a can of La Croix

Probably not the best choice since their CEO is a far right Trumpster.

As noted, I am not surprised. Biden was the understudy himself, so he knows what the job entails. And he has known Harris for a couple of years now, they got to know each other when his late son Beau was also a DAState AG.(edited)

Of course she’s not perfect, but who is? She has Joe’s respect, even after ruthlessly attacking him in the primaries. Or maybe even because she was able to attack him on a professional level, and not on a personal one. The sort of person you want as your understudy.

As I see it, she may be ruthless, but she’s our ruthless fighter.

It’s the least inspiring choice, so naturally it’s #1 for Biden. I just wish this old post of mine wasn’t sounding quite so familiar right now: relevant snippet: All that needs to happen now is for the Democrats to oblige him by nominating another “safe” centrist neoliberal who will has pre-emptively given up on giving people anything to hope for.- who won’t inspire legions of activists , who won’t give non-voters the belief that change is possible, and who won’t offer anything other than “n…

Hopefully I’m wrong. But damn, the democrats are doing everything possible to ensure that nobody gets excited about their ticket.

Remember her higher education loan forgiveness program proposal that was so hilariously convoluted and niche-targeted that it spawned a meme generator for making shitty third-way feel-good policy proposals that wouldn’t actually do anything or help anyone?

Gosh, such a great pick.

OK, looking for the bright side even though he went with one of my least-favorite choices.

While Harris absolutely did use the power of her office as state AG to enforce unjust and terrible laws, she did also use the position to get a few good things done. For example, she successfully went after a number of oil and automotive companies for pollution and was able to use California’s market share to force social media companies and software developers to adhere to privacy rules that were much stricter than they would have had to otherwise.

So there’s that I guess.