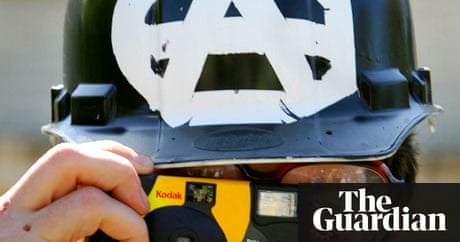 Islamist terrorists also mentioned in briefing, as anarchists complain of being criminalised for their beliefs

“Anarchism is a political philosophy which considers the state undesirable, unnecessary, and harmful, and instead promotes a stateless society, or anarchy. Any information relating to anarchists should be reported to your local police.”

Many have been shot for having a loaded wallet… The shooting of Amadou Diallo occurred on February 4, 1999, when Amadou Diallo, a 23-year-old immigrant from Guinea, was shot and killed by four New York City Police Department plain-clothed officers—Sean Carroll, Richard Murphy, Edward McMellon and Kenneth Boss—after they mistook him for a rape suspect from one year earlier. The officers fired a combined total of 41 shots, 19 of which struck Diallo, outside his apartment at 1157 Wheeler Avenue in the Soundview section of The Bronx. The four were...

I guess that falls under the black/brown people category…

Looks like 80 percent of Chicago cops need to be charged with evidence tampering and obstruction of justice.

New item: bodily fluids: Up to half of the Americans killed by police have a disability

Techdirt: San Diego Cop Thinks You Might Have Turned Your Cell Phone Into A Gun And That ‘Officer Safety’ Trumps Constitutional Rights

“Phones can be converted into weapons …. look it up online,” the cop told him.

When Pringle tried to talk sense into the cop, the cop slapped the phone out of his hand where it fell onto the boardwalk and broke apart.

The other cop then pounced on him, slamming him down on the boardwalk where he ended up with a laceration on his chin.

But it does give law enforcement the justification it needs to continue harassing people for recording police activity. When any smartphone could conceivably be a weapon, securing the scene means grabbing all the smartphones in the vicinity. Whether or not this seizure would hold up in court during civil proceedings still needs to be tested, but by that point the elimination of possibly damning footage will have already been accomplished.

Worse, it makes mistaking a cell phone for a gun a justification for shooting someone carrying nothing more dangerous than a communication device. The slim possibility that it may be a weapon would generate the requisite “fear for safety of self and others” needed to deploy deadly force.

Okay, not exactly the police.

A driver in Hamburg saw a suspicious man with a suspicious vest and called the police. They feared a suicide bomber and flooded the building with officers.

A spokesperson of the police said the jogger with a weight vest did not break any laws. (dafuq? why should anyone believe so?)

Oh, good, our madness is contagious.